Israel to pay compensation to families of Yemenite immigrant children 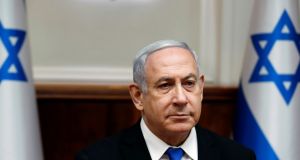 Israeli prime minister Benjamin Netanyahu: ‘The time has come that the families whose babies were taken from them receive recognition from the state and also compensation.’ Photograph: Ronen Zvulun/Pool/EPA

Seventy years after the disappearance of the children of Yemenite immigrants to Israel, the government has expressed sorrow over the affair and agreed to pay compensation to the families.

About 1,050 babies and toddlers, mostly from Jewish immigrants from Yemen, went missing between 1948 and 1954, the early years of Israel’s statehood, often from hospitals or medical clinics. Their parents were told the children had died, but they never received any bodies for burial or death certificates, sparking speculation that the children had been put up for adoption.

After a decades-long struggle by relatives, the Israeli government expressed sorrow over the affair and agreed to pay €38,000 to families who were not informed of their children’s deaths, or the location of burial. Families whose children’s fate remains unknown will receive €50,000.

Prime minister Binyamin Netanyahu said it is time to find out what happened and to right this wrong.

“The time has come that the families whose babies were taken from them receive recognition from the state and also compensation. The compensation will not atone for the terrible suffering the families have endured and are enduring but we hope it will bring a modicum of comfort, which they deserve.”

The education ministry was also instructed to include the story of the Yemenite children in school curriculums.

Not all the relatives were happy. Yair Davidi, whose brother Zion disappeared when he was 1½ years old, said receiving compensation is not the most important thing.

“We are very surprised at this decision because we have sought truth, not money. We’re not here to ask for money. My parents, may they rest in peace, are no longer alive but their will and testament was for us to continue looking for the children. This compensation doesn’t give us anything because it doesn’t shed any light on what happened.”

Union Sefaradi Mundial, a non-profit devoted to commemorating the legacy of Jews from Arab countries, expressed disapproval of the restitution plan, calling it “offensive”.

“This is an attack on history and the pain the families have carried in their hearts from the day they lost their children. The government must admit the state’s responsibility for the events of the children’s disappearance.”

Eighteen years after the children disappeared, the families received military draft notices for them – reinforcing the rumours that they had been abducted as part of a plan by the authorities, dominated by Jews of European extraction, to give them or to sell them to childless Holocaust survivors.

Three separate official committees investigated the affair and all reached the same conclusion: that most of the children died of illness and that there was no evidence of their institutionalised abduction.