Republicans and Donald Trump: the tale of the untameable shrew

Maureen Dowd: GOP leaders attempting to bridle the ex-president are on a fool’s errand 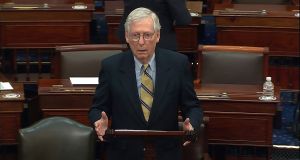 Is Shakespeare a misogynist? Should The Taming of the Shrew be retired, given Kate’s archaic speech of surrender at the end, laying out what women “oweth” to their husbands, or sovereigns, and urging wives to put their hands under their husband’s feet? Can that speech be mitigated if Kate winks at the end, as Mary Pickford did in the 1929 movie with Douglas Fairbanks? Or if Kate poisons the champagne at the end, the coup de cyanide of Lileana Blain-Cruz’s 2011 Yale School of Drama production with Lupita Nyong’o?

These were the questions debated on the latest edition of Shakespeare Hour LIVE!, the weekly show of rhe Shakespeare Theatre Company in Washington. As Lynda Boose, an English professor at Dartmouth, wrote in her essay “Scolding Brides and Bridling Scolds”: “For Tudor-Stuart England, in village and town, an obsessive energy was invested in exerting control over the unruly woman – the woman who was exercising either her sexuality or her tongue under her own control rather than under the rule of a man ... A discourse that locates the tongue as the body’s ‘unruly member’ situates female speech as a symbolic relocation of the male organ, an unlawful appropriation of phallic authority in which the symbolics of male castration are ominously complicit.”

Shaming rituals came into practice for women who were reported to authorities for the crime of a “scolding” tongue. Some offenders were muzzled with bridles; others were strapped to “cucking stools”,’ chair-like contraptions, and repeatedly dunked in water.

Even four centuries later, women in politics are still stung by sexist barbs. But what if we do a gender flip? A male politician, after all, is at the centre of the most consequential production of The Taming of the Shrew: The futile efforts by Republicans to bridle Donald Trump so they can curb his scolding tongue while keeping his voters.

It’s a fool’s errand. Like Kate, Trump is seen as a “fiend of Hell”. He has the nastiest tongue ever heard in American politics. But unlike Kate, he won’t be persuaded to be more civilised. The GOP these days recalls Hortensio’s line, “There’s small choice in rotten apples.”

Lindsey Graham, who says that Trump is a “handful”, a word usually levelled at spirited women, was set to go to Mar-a-Lago at the weekend to golf with his sovereign lord and try to explain the importance of the 2022 midterms to Trump’s legacy. But Trump doesn’t give a damn, except how he can use the midterms for revenge or self-promotion.

Like Petruchio with Kate, Kevin McCarthy lavishly flatters Trump – opposing impeachment and making a pilgrimage to Mar-a-Lago – in a vain attempt to domesticate the feral ex-president.

Mitch McConnell, who loathes Trump, thought he was being Solomon-like, rejecting impeachment on a silly technicality, then declaiming on the Senate floor that Trump’s lies led to the Capitol riot. But to his surprise and dismay, McConnell – who sees himself as the great protector of the Senate – garnered jeers for his hypocrisy, not praise for his courage. After Merrick Garland, everyone knew McConnell could do what he wanted on the Senate floor; he was not bound by mundane procedural matters.

By coddling Trump on his election fakery, the Republicans gave it so much oxygen, it led to tragedy. Trump, the supreme ingrate, wasn’t grateful for McConnell’s nay vote. He promptly composed a masterpiece of spleen, a statement threatening to primary Mitch’s candidates and calling him “a dour, sullen, and unsmiling political hack” who lacks political wisdom, skill and personality.

Trump wanted to pile on the bile with a snippy line about McConnell having too many chins and not enough smarts, but shelved it.

McConnell should be an object of scorn. Trump could not have done anything without him. Each used the other for his own purposes. Trump’s achievements for conservatives, refashioning the supreme court and getting a tax cut, were really McConnell’s.

Former Guy, as President Joe Biden called Trump, then turned his choler on Nikki Haley, who revved up for 2024 by telling Politico that Republicans should take the good Trump built and jettison the bad. Nikki, Nikki, Nikki. You thought you’d get a Mar-a-Lago audience after that?

Ted Cruz’s truckling may be the most jarring, given Trump’s attacks on Cruz’s wife and father in the 2016 campaign. But I’ve always said the story of Washington should be titled “Smart People Doing Dumb Things”. Cruz wouldn’t even study with people from what he called “minor Ivies” while at Harvard Law School but didn’t think twice before leaving Texans starving, freezing and dying to go catch some rays in Cancún, Mexico, and then blaming his daughters.

We’ll see if Trump can sustain this king-in-exile routine without the infrastructure he once had. Consider his asinine election challenge with all those crazy lawyers. Ever the shrew, all he has left now is his forked tongue. – New York Times