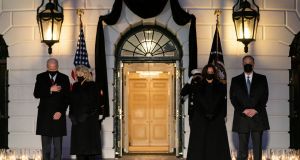 In a sombre address to the nation as the US surpassed half a million coronavirus deaths on Monday, President Joe Biden urged the country to unify in its battle against the virus.

“I ask all Americans to remember those we lost and those we left behind. But as we all remember, I also ask us to act, to remain vigilant, to stay socially distanced, to mask up, get vaccinated when it’s your turn,” the president said in his address from the White House.

Mr Biden used the speech to urge Americans to overcome partisanship and follow public health guidelines as his administration races to distribute vaccines and end the pandemic.

Mr Biden has previously been criticised as too cautious in setting goals for vaccine distribution, but the administration has said it has increased vaccination rates to 1.7 million a day, and is on track to surpass its goal of delivering 100m shots within the first 100 days of the administration.

The president’s speech on Monday, however, did not focus on metrics. Instead, Mr Biden focused on the loss Americans have felt because of the pandemic and the larger theme of coming together – something Mr Biden has emphasised throughout his campaign.

“We must end the politics of misinformation that’s divided families, communities and the country; that’s cost too many lives already,” Mr Biden continued in his speech. “It’s not Democrats or Republicans who are dying from the virus. It’s our fellow Americans, it’s our neighbours. It’s our friends, our mothers, our fathers, our daughters, husbands, wives. We have to fight this together as one people, as the United States of America. That’s the only way we’re going to beat this virus, I promise you.”

Mr Biden’s speech was bookended by solemn rituals to honour the 500,000 deaths. Ahead of his address, the National Cathedral rang its bells 500 times; afterwards, the president joined the first lady Jill Biden, vice-president Kamala Harris, and second gentleman Doug Emhoff outside the White House, where they observed a moment of silence surrounded by 500 candles.

The Biden administration’s approach to addressing the pandemic is markedly different from the Trump administration’s. Where Mr Trump routinely brushed off the severity of the virus, the Biden team has hosted multiple events to acknowledge its severity, including a primetime address, a memorial ceremony, and a moment of silence. Mr Biden and his team have stressed the importance of remembering how dire the pandemic is.

“As a nation, we can’t accept such a cruel fate. While we’ve been fighting this pandemic for so long, we have to resist becoming numb to the sorrow,” Mr Biden said.

The US has recorded the worst death toll of any country in the world, but there are promising signs ahead. Hospitalisations have declined more than 50 per cent nationwide in the past month, and, as of Sunday, more than 13 per cent of the US population has received at least one dose of a Covid vaccine.

Mr Biden’s speech spoke to this optimism, saying that America and the world would overcome the pandemic.

“Let this not be a story of how far we fell, but how far we climbed back up. We can do this,” Mr Biden said.