More than 2.7 million jabs administered to Chile’s population of 19 mllion so far 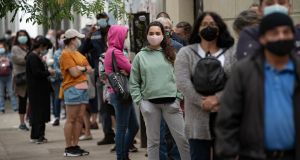 Struck by social upheaval and a severe coronavirus outbreak, Chile is hoping to turn a corner as it powers ahead of its South American peers in the race for Covid-19 vaccines.

More than 2.7 million vaccinations have been administered to Chile’s population of 19 mllion so far – more than in all of Africa. That has made the country one of the frontrunners in the global scramble for vaccines on a per capita basis, lagging behind just a handful of richer countries including Israel, the UK and the US.

Although the centre-right administration of president Sebastián Piñera came under pressure after violent protests against inequality erupted in October 2019, its far-sighted and pragmatic approach in securing vaccines is poised to boost both Chile’s economic recovery and the government’s political standing ahead of presidential elections in November.

“I hope that other countries learn something from this, and realise that [it helps] if you go out and buy the best you can get for the best price, and don’t have ideological blinkers,” he added.

After boasting of positive early results when the crisis first hit a year ago, Chile’s mortality rate rose to reach a peak of 170 deaths a week by June. Some believe that galvanised the technocratic government of Chile – which has cultivated a reputation for competent macroeconomic management – into turning its full focus to the vaccination drive.

Most of the vaccines administered in Chile so far were acquired from Sinovac of China, Chile’s biggest trading partner. Some 4 million Sinovac shots have already arrived, and another 6 million are due to arrive by mid-March.

David Gallagher, Chile’s ambassador in London, helped to secure vaccines from AstraZeneca, Pfizer and Johnson & Johnson. He attributed much of Chile’s success to a strategy similar to the UK’s, but conceived independently in Santiago by Mr Piñera as early as last May – hedging risks by securing a “portfolio of vaccines” through bilateral agreements that were “totally untainted by nationalism or ideology, not giving a damn” where the vaccines were made.

“That’s what made the difference,” said the former investment banker and Oxford fellow. “Because Chile has signed so many trade agreements, nobody is afraid of picking up the telephone – if necessary ringing the CEO of a pharmaceutical company – and just getting on with it.”

As well as getting a head start in negotiating vaccine agreements, analysts also praised Chile’s foresight in arranging clinical trials in exchange for earlier delivery and reduced prices of vaccines. Some vaccine producers already had good relations with Chilean universities and hospitals before the pandemic began.

In total, Chile has commitments for far more vaccines than it needs to inoculate its entire population. It has set a goal of vaccinating 5 million people by April, and 15 million, or about 80 per cent of its population, by July.

But Jorge Gallardo, a medical expert in Chile involved in approving Sinovac, said he was worried about the Chinese jab’s effectiveness compared to other vaccines. “Something is better than nothing faced with this grave situation, but there is much uncertainty,” he warned.

Despite such concerns, he highlighted the efficiency of Chile’s well-established vaccine system, which has enjoyed wide acceptance among the population since it began in the 1970s.

The vaccine has been provided for free, and frontline workers and the elderly have been prioritised. The central administration has also helped to streamline the process, as opposed to some countries where that has been left to local or regional officials.

Sinovac has also proved more straightforward to distribute – especially to more isolated communities in Chile’s logistically complicated and unusually elongated territory – as it does not need to be stored at extremely low temperatures like some other vaccines.

The vaccination drive is expected to help return the economy to growth after contraction last year. For some, the bigger question is what the successful rollout of the vaccine could mean for social reconciliation in the country, where divisions have simmered since protests that broke out in 2019.

“It’s a great opportunity to heal the soul of Chile,” said Rodolfo Carter, mayor of the populous and diverse La Florida district in southern Santiago, which set up a spacious vaccine centre in a football stadium renamed Espacio Esperanza, or Place of Hope.

Describing a country that is “deeply wounded”, Mr Carter argued that the vaccination process is a unique chance to unite a country where, despite being one of Latin America’s fastest-growing economies in recent decades, inequality remains high and much of the population complains of an out-of-touch elite.

“When you have a rich person sitting a metre apart from someone from a poor community waiting for a vaccine, public health can restore people’s dignity,” said Mr Carter. “We must seize this opportunity to win back a country where people no longer burn churches or metro stations . . . more than pricking arms, this is about touching hearts.” – Copyright The Financial Times Limited 2021