US Politics: The weakness of America’s welfare state gives Democrats a raison d’etre 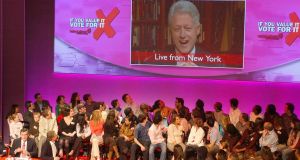 The archive of the US broadcaster C-Span is among the internet’s little wonders. In January 1993, an “Anthony Blair” toured Washington with another British MP named Gordon Brown.

Their brief: to divine how president-elect Bill Clinton had won office and what their four-times-defeated Labour Party might learn. Their interview with a C-Span anchor of the just-the-facts school (“How many MPs in the House of Commons?”) is immortalised.

Absent Covid-19, Washington’s floating population would include similar clue-seeking foreigners of a progressive bent. President Joe Biden’s centre-left peers are out of power and often out of sorts in the UK, France, Australia and the Netherlands. In Germany, they have not held the federal chancellery since 2005. Brazil, too, was in social democratic hands then. Rightwing populists now reign there.

In truth, travel restrictions have saved these eager learners a wasted journey. If the Democrats stand out from a centre-left malaise, it is for reasons that are not much imitable outside the US.

A couple are obvious. A strict two-party system protects (in truth, over-protects) the incumbents, so that even a bumbling Democrat would clinch near half the vote in a presidential election. The liberal, labour and green veins of thought, so often distinct in Europe, are crammed into just one US movement.

Race adds to this structural advantage. The leftward tilt of minorities can be overdone (Republicans have gained, especially among Latinos) but it holds often enough to matter. Few democracies have the ethnic diversity of the US, so few parties of the left have the electoral reach of the Democrats.

By themselves, these variables would save the party from the near-terminal throes of progressives elsewhere. But a third really makes the Democrats impossible for others, at least in Europe, to emulate.

It does not over-flatter the European left to suggest it is cursed by past success. The welfare state is so large, and support for it so deep, that voters can turn to the right or far-right without endangering it.

Germany’s Christian Democrats are mostly at ease with the mixed economy. The French National Front tends to equate free markets with social dislocation and foreign influence. Britain’s Conservatives exalt Singapore more in thought than word or deed. They know the public’s aversion to looser labour laws.

For all the fame of the US culture war, it is Europe’s poor to middle class that is freer to vote on values. Their material interest in public services and statutory paid leave does not hinge so much on a change of government.

The weakness of the US welfare state, both in extent and cross-party backing, gives the Democrats a raison d’etre. For workers who like to see a safety net laying taut beneath them, there is a cost, or at least a risk, in voting any other way.

The question is not why so many poor Americans support Republicans. It is how many more might if the party called a ceasefire on mostly well-liked programmes and regulations. Had Donald Trump ruled half as paternalistically as he ran in 2016, this column would be about the first meanderings of his second term.

Viewed from afar, Europe’s left is not uniquely inept, then, just uniquely otiose. What is a movement for when its central cause – redistribution – has the assent of its rivals, at least in the essentials? Even if progressive parties offer more and better welfare (a costly choice), it cannot compare to the pledge of universal healthcare in a country that lacks it.

The US left benefits from its historic failure. Having never completed the welfare state, far less entrenched it, Democrats have an existential purpose. This is not an omission that sister movements would aspire to replicate, even if they could bend time and space to do it.

Petitioned for help, Democrats can still dispense advice of immense value. Try not to elect radioactively unpopular leaders (UK Labour’s age-old wont). Avoid complacency about youth unemployment (French Socialists). Corruption, or even the aroma of it, is bad (various). But these are verities or banalities. They require no study or Tocquevillian tour.

What is distinctively American is the gap between the two parties on the social contract. And the subsequent indispensability of the Democratic voice. That the Biden and Republican plans for pandemic relief are $1.3 trillion apart could not be more eloquent of the stakes. To look at their electoral record, then the lot of the US poor, it is hard to tell if the Democrats are the most successful progressives in the rich world or the most consistently disappointing.