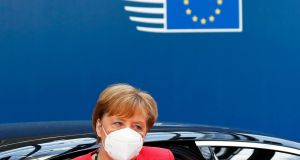 Some 16.2 million Germans have downloaded the app, which runs in the background, logs contacts with other app users and notifies them of contact with someone who registers a positive test for the virus.

On Friday it emerged that an unknown number of users were warned too late – or not at all – of contact with a Covid-19 carrier. A spokesman for software company Sap, one of the German app developers, insisted the problem was not with the app itself but with some versions of the Android operating system that powers 78 per cent of German smartphones.

Android is an open-source software, sponsored by Google and modified by manufacturers for their devices.

Huawei and Samsung, who together have a 36 per cent market share in Germany, made changes to Android to optimise battery life on their phones. As a result, some users had to change a setting in their phones to allow apps – including the Covid-19 app – to update.

“These special settings do not follow Google standards,” the Sap spokesman added. “We are pressing for all affected smartphone makers to make the change. Huawei has already confirmed to us that they have made the correction.”

The problem had been noted in the app’s documentation, and an update on Wednesday solved the problem, but not before it caught the attention of Germany’s Bild tabloid in a front-page headline: “Government embarrasses itself with corona app.”

Despite the app scare, public health numbers suggest Germany’s Covid-19 infection pattern remains stable. Just over 200,000 cases have been confirmed since the pandemic began, with 9,111 deaths and 189,400 people recovered.

Reduced lockdown measures and the start of the holiday season travel have yet to affect the so-called reproduction, or R, rate: it remains stable at 1.25, meaning four infected people spread the virus to five others.

The infection level varies widely in Germany, with Bavaria and North Rhine-Westphalia harder hit than smaller states such as Saarland, Thuringia and Mecklenburg-Vorpommern – all with fewer than 20 new cases each day.

Ahead of a meeting to discuss the matter on Friday, Saxony’s premier, Michael Kretschmer, backed the idea.

“People who return by plane from a crisis region with a large-scale infection transmission must allow themselves be tested immediately after their return,” he said.

“The most important thing is that we clarify whether it is obligatory or not,” he added.

Germany’s health authorities have 130 countries on its risk list, including the US, Israel and Turkey.