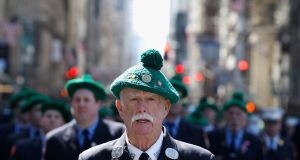 St Patrick’s Day Parade in New York. Up to 5,000 visas a year could be made available to Irish citizens. Photograph: John Lamparski/Getty Images

As Washington continues to dissect the results of Tuesday’s midterm elections, which saw the House of Representatives return to Democratic power for the first time in eight years, Irish eyes in the US capital are focused on another matter.

The next two months – known as the “lame-duck” session as the current Congress sits out its final weeks – offers the best opportunity in some time to secure a visa deal for Irish citizens.

Behind the scenes discussions are under way to clinch an agreement that would see the E3 visa scheme, which only applies to Australians, extended to Irish citizens.

Australia, an important military ally of the US, secured the coveted visa programme in 2005 as part of a US-Australia trade deal. It was widely seen as a thank you by the US to Australia for its participation in Iraq and Afghanistan.

More than a decade later, Australians are not taking up the full allocation of 10,500 visas offered each year. Ireland senses an opportunity.

In the final days of the last congressional session before members returned to their districts for the midterms, two members of Congress – Republican Jim Sensenbrenner and Democrat Richard Neal – introduced a Bill to the house. A vote could take place as early as this week when members of Congress reconvene on Capitol Hill.

John Deasy, the US special envoy who has been working on the proposal with the Department of Foreign Affairs in Washington and Ireland’s senator for the diaspora Billy Lawless, says that the Bill will be dealt with under a procedure known as “Suspension of the Rules” which allows the House to process non-contentious measures swiftly.

“The E3 bill as drafted is being viewed as a non-contentious measure by both Democrats and Republicans,” he says. “Having two long-serving and respected members of Congress from different sides of the aisle introduce it jointly bears that out.”

But there are many obstacles to a deal. Firstly, any Bill must be endorsed by the Senate and needs unanimous approval.

Secondly, there is the question of the undocumented Irish. The Bill in its current form relates to future flows of Irish people who want to live and work in the United States, but sources say there could be room for negotiation on the issue further down the line.

Ciaran Staunton of the Irish Lobby for Immigration Reform says he is waiting to see details of the Bill. “While any new visa is welcome, and we support any opportunity for Irish people to live and work in the United States, we would hope that there is something for the undocumented on this,” he says.

Diplomats are also sounding caution. Ireland has seen similar initiatives brought forward before, only to be thwarted at the last moment.

The Senate passed a comprehensive immigration reform Bill in 2013 but it failed in the House. Similarly, a 2015 proposal on extending the E3 visa to Ireland did not secure enough congressional support. This time, officials are also working on a proposal to make it easier for American retirees to move to Ireland, by lowering the income threshold required and permitting Americans to work for up to 20 hours a week.

Whatever happens in the coming weeks, the quest for a new visa programme for Irish citizens should continue. The visa, which is seen as an alternative to the H-1B visa, is a two-year renewable visa which covers spouses. It is also less costly to secure than the H-1B professional visa. Up to 5,000 visas a year could be made available to Irish citizens.

With the number of Irish people choosing to live and work in the United States on a steady decline for years, securing new emigration paths is crucial if Ireland wants to continue the deep cultural and economic links between Ireland and America.

Next week the heads of Ireland’s diplomatic missions across North America will gather in Washington. The annual gathering comes after the Cabinet in Dublin was briefed last week on the new Ireland-US strategy, part of the Government’s effort to double Ireland’s global footprint by 2025.

Among the proposals are to invite more American politicians to visit Ireland, and step up engagement with contacts on Capitol Hill – a strategy being pursued by the embassy in Washington for many years.

Given that the United States is Ireland’s number one trading partner outside the EU, nurturing the Irish-US relationship should be a key diplomatic priority in the years ahead.