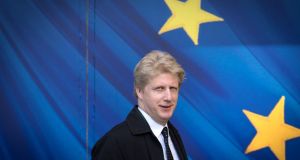 MP Jo Johnson, who has quit as junior transport minister, said he would be campaigning for a second referendum on Brexit. Photograph: Stefan Rousseau/PA Wire

Jo Johnson has resigned from the government, saying he cannot support British prime minister Theresa May’s Brexit deal, and MPs are being offered a choice between “vassalage and chaos”.

The MP for Orpington and rail minister published an article saying he could not vote for the deal which Mrs May is expected to bring back to parliament within weeks – and instead would be campaigning for a second referendum.

“It has become increasingly clear to me that the withdrawal agreement, which is being finalised in Brussels and Whitehall even as I write, will be a terrible mistake,” he said in an online article.

With great regret, I'm resigning from the Government - I have set out my reasons in this article and the video below. https://t.co/hzimcS8uiR pic.twitter.com/hUN9RLzDfq

He said the public were being offered “an agreement that will leave our country economically weakened, with no say in the EU rules it must follow and years of uncertainty for business” or a no-deal Brexit “that I know as a transport minister will inflict untold damage on our nation”.

“To present the nation with a choice between two deeply unattractive outcomes, vassalage and chaos, is a failure of British statecraft on a scale unseen since the Suez crisis.”

Mr Johnson said his objections to the deal were different to those of his brother, Boris, who stepped down as foreign secretary in July saying that he could not support Mrs May’s Chequers strategy.

Mr Johnson’s shock resignation came just a few hours after Mrs May’s de facto deputy, David Lidington, insisted he was confident MPs would throw their weight behind the government’s deal once it was published.

The prime minister is expected to hold a cabinet meeting next week in the hope of securing the support of her ministers for her negotiating stance – and hopes to strike a deal within weeks. – Guardian