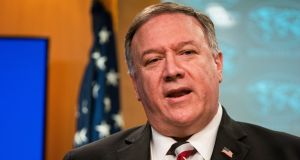 The row between the Trump White House and the International Criminal Court (ICC) has worsened after a fresh exchange of insults, with US secretary of state Mike Pompeo describing the court as “a nakedly political body” – and global supporters demanding he stop his “shameful attacks”.

What was new about Mr Pompeo’s comments on Tuesday was that while his contempt for the ICC has thus far focused mainly on its prosecutor, Fatou Bensouda, and her determination to open an investigation in Afghanistan, this time he publicly named two little-known though senior officials.

The belief at ICC headquarters in The Hague is that this new strategy has two aims: to sow unease among officials who may feel they cannot defend themselves against the US and to convince the court to appoint a more compliant prosecutor when Ms Bensouda steps down in June next year.

The row dates to March 2019 when Ms Bensouda applied for permission to investigate the alleged mass killing of civilians by the Taliban, as well as allegations of torture by Afghan government forces and by the US, including the CIA, between May 2003 and 2014.

Her application was at first rejected by the court, to the dismay both of international human rights organisations and of those who felt the ICC should strategically switch its focus away from Africa – a focus for which it had been slated by the African Union as “a tool of western neo-colonialism”.

However, that rejection was overturned earlier this month by a panel of appeal judges, giving the prosecutor an immediate green light.

Even more controversially, the judges decided unanimously that the inquiry’s scope should also include allegations that CIA “black sites” were operated in Poland, Lithuania and Romania to which captives were forcibly transferred – or “rendered” – for so-called “enhanced interrogation”.

This decision was expected to draw the ire of the US administration, which it duly did.

A few days later, Mr Pompeo described it as “a truly breathtaking action by an unaccountable political institution masquerading as a legal body”, adding that it was “reckless” coming just days after America signed a peace deal with the Taliban aimed at ending 18 years of conflict.

Then , on Tuesday, he went further, identifying Ms Bensouda’s chief of staff, Sam Shoamanesh, and the court’s head of jurisdiction, Phakiso Mochochocko, as two people who were “helping drive . . . Fatou Bensouda’s efforts to use the court to investigate Americans”.

He added: “I’m examining this information now and considering what the United States’ next steps ought to be with respect to these individuals and to all those who are putting Americans at risk.”

In a statement on Wednesday, the New York-based World Federalist Movement – which incorporates the civil society Coalition for the ICC – called on the US to cease its “shameful attacks” on the court which were calculated “to intimidate international justice defenders and their families”.

It said the US should also stop “abusing its sanctions regime” and lift existing travel sanctions against Ms Bensouda.