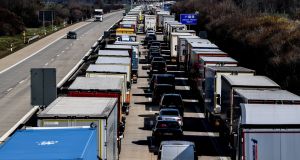 Trucks are stuck in 60km long traffic jam as the wait for border control on the motorway A4 near Bautzen, Germany, on Wednesday. Photograph: EPA

Desperate travellers in cars and trucks are choking European borders, creating huge traffic jams as they try to get home before borders shut, or to deliver critical supplies to help nations cope with the quickly spreading coronavirus.

It came as Johns Hopkins University said the total number of confirmed cases worldwide has passed 200,000.

The Johns Hopkins Centre for Systems Science and Engineering’s online tally showed 201,436 cases, with 8,006 deaths, and 82,032 patients listed as recovered.

Trucks became stuck in 60km long traffic jam as the wait for border control on the motorway A4 near Bautzen, Germany, on Wednesday. The traffic jam arose after authorities closed the border crossing between Poland and Germany.

Hungary overnight opened its borders in phases, seeking to alleviate some of the pressure from eastern Europeans trying to return home. Bulgarian citizens were first allowed to cross the country in carefully controlled convoys, then Romanians had a turn.

But by early Wednesday on the Austrian side of the border, trucks were backed up for 27km and cars for 14km as rules allowing only Hungarians or transport trucks through the border kicked back in.

The traffic jam on the Czech-Polish border — at the northern Nachod-Kudowa-Slone crossing — was more than 48km long on Wednesday, up from 40km on Tuesday.

European Union leaders have been working on how to make sure food, medical supplies and other essential goods keep flowing but so far borders have been clogged.

They are also trying to figure out ways to allow seasonal agricultural workers, needed to keep the production of food going, to travel back and forth across essentially closed borders.

Nations around the world are facing the same issues, with the US and Canada working on a mutual ban on non-essential travel between the two countries. – PA