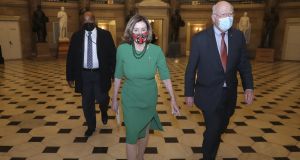 US House speaker Nancy Pelosi and Senator Patrick Leahy, right, walk to the House Chamber on Monday. The House was poised to vote on legislation that combines pandemic relief with a Bill to fund government operations. Photograph: Oliver Contreras/ Bloomberg

The US House of Representatives was set to approve an increase in stimulus payments to a majority of Americans, in a vote to add to the impact of this month’s $900 billion (€737 billion) economic relief package.

The move in the lower chamber of Congress, which is controlled by Democrats, matches the push for larger cheques made in recent days by Donald Trump, the outgoing US president, which kept the fate of the entire Bill in limbo for days over the Christmas holiday until he signed it on Sunday.

If it gets a green light in the House, the boost to direct payments from $600 per person to $2,000 will pile pressure on Republicans in the Senate to ditch their resistance to larger cheques and a bigger stimulus package.

The battle on Capitol Hill over the bigger cheques has significant ramifications for the world’s largest economy, as larger government payments will lift income and consumption in the first quarter of 2021.

Economists have welcomed the rest of the package for including aid to small business and extending unemployment benefits. But larger direct payments to households will further support the recovery at a time when the winter coronavirus surge is hurting the labour market.

“This relief is crucial for millions of families,” Richard Neal, the Massachusetts Democrat and chairman of the House Ways and Means Committee, wrote in a tweet on Monday morning.

The tussle could also carry big political implications, coming ahead of two Senate run-off races in Georgia that will determine control of the upper chamber of Congress in the first two years of Joe Biden’s administration.

Democrats have argued that if they can win back the Senate, they will be able to approve more stimulus for households, and implement more of Mr Biden’s economic agenda, which includes large-scale public spending partially funded by higher taxes on business and the wealthy.

But it is far from clear that Mitch McConnell, the Republican Senate majority leader, will concede to higher direct payments, despite pressure from both Democrats and the White House.

While some Republican senators, such as Josh Hawley of Missouri and Lindsey Graham of South Carolina, have embraced the idea of $2,000 cheques, others such as Pat Toomey of Pennsylvania are opposed.

“I don’t agree with $2,000 to people who have had no lost income whatsoever, which is the vast majority of Americans, but the president’s free to make that case,” Mr Toomey said on Fox News on Sunday.

Mr Trump finally signed the Bill to release $900 billion in coronavirus stimulus spending and the wider $2.3 trillion federal government budget on Sunday night after earlier in the week calling it a “disgrace” and demanding changes. In the end, no changes were made.

The tension over the stimulus payments has intersected with another budgetary battle in Washington over the $740 billion annual defence funding Bill, which Mr Trump vetoed last week in another clash with members of Congress.

In a separate vote on Monday, the House was expected to vote to override Mr Trump’s veto with a super majority of lawmakers. But some Republican senators, including Mr Graham, a close ally of Mr Trump, said he would vote to override only if Democrats accepted the president’s demand to repeal legislation protecting internet platforms from liability for online content.

The so-called “section 230” legal shield for technology companies has become a prime target of conservative lawmakers as well as Mr Trump in recent months as they accused Silicon Valley of political bias against them in this year’s campaign. – Copyright The Financial Times Limited 2020