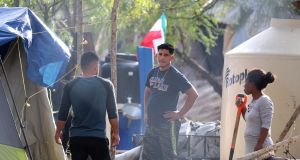 A group of migrants live in a shelter in the city of Matamoros, Mexico. Migrants’ hopes of reaching the US have been raised by the election of Joe Biden. Photograph: Abraham Pineda-Jacome/EPA

For Charleston Wang, a Cincinnati, Ohio-based immigration lawyer, the past four years under United States president Donald Trump have been a very strange time.

“It’s been unusual; extraordinary; totally unprecedented,” he says of the circumstances that have seen demand for his expertise soar, but for rather disheartening reasons.

For his clients, chiefly immigrants from mainland China, former Soviet republics, Africa and elsewhere, the four years of the Trump administration have been little short of a nightmare. A host of restrictions have been placed on people attempting to reach the US for employment, family reunification or personal safety reasons.

President-elect Joe Biden has promised to remove many restrictions on his first day in office. He is expected to issue an executive order lifting a Trump-era travel ban on immigration from several Muslim-majority countries, reinstate protections for undocumented immigrant children formerly protected under the Deferred Action for Childhood Arrivals policy (Daca), and has promised to set up a task force to reunite the more than 500 children currently held by immigration authorities and separated from their parents at the southern border with Mexico.

Biden has picked Cuba-born Alejandro Mayorkas to head the Department of Homeland Security, a move welcomed by immigrants’ rights organisations. As the daughter of immigrants, vice-president Kamala Harris is expected by many to use her position as an important advocate for such rights.

But uncoiling the constellation of legal and institutional restrictions put in place by the Trump administration will be far from straightforward, experts say.

“One of the challenges is that the Trump administration has put into place a number of regulations that will take some time to rescind,” says Denise Gilman, director of the Immigration Clinic at the University of Texas at Austin. “For years we’ve seen this perception of asylum seekers and immigrants as a security threat or a danger rather than seeing them as applicants to remain in the United States.[Changing that] requires different personnel, a change in the interpretation of the law, a change in the regulations. That will take some time.”

In the Trump-run White House, anti-immigrant sentiment was pushed to unprecedented levels across a wide network of government institutions.

Shortly after his inauguration in January 2017, Donald Trump signed an executive order blocking citizens from countries including Iran, Syria, Libya and others from securing visas to come to the US. The move forced many into lengthy visa-waiver processes that, in some cases, have taken years to reach a conclusion or provided no outcome at all.

Even if you were just for a relatively short period of time without much security in another country, you may be barred from obtaining asylum

Last June, the White House temporarily stopped issuing the H-2B visa used by seasonal and other workers to enter the country on a short-term basis, citing the need to protect US workers struggling with the fallout of coronavirus-fuelled job lay-offs.

It has also placed severe restrictions on the H-1B visa for highly skilled immigrants, a majority of whom come from India and China, says Wang, making it harder for US employers to hire non-American academics and medical and tech professionals. “It started because of the [US-China] trade wars. There are Chinese cases that have been stalled for two or three years now,” he says. “I have an employer coming in this afternoon who has a small printing company who wants a Chinese student to come over to work. [But] they are just denying [visas] outright.”

The Trump-era crackdown goes beyond those pursuing employment- and familial-based immigration avenues. Last month, the administration adopted tougher eligibility requirements preventing applicants from claiming asylum in the US on grounds of gender- or gang-related persecution, and for people who’ve spent time in a third country prior to entering the US. “Even if you were just for a relatively short period of time without much security in another country, you may be barred from obtaining asylum,” says Gilman. Observers have called it the biggest attack on the asylum system in the four years of the Trump presidency.

Under the Trump administration, the rate of granted asylum cases has fallen 40 per cent. The number of refugee places issued has dwindled from 85,000 in 2016, the last year of the Barack Obama administration, to 18,000 in 2020.

Other restrictions include the disqualification of asylum seekers who have entered the country illegally, used fraudulent documents or not paid taxes.

To be sure, immigrants’ hopes of reaching the US have been raised by the election of Biden.

But whether he can follow through with promises such as carving a pathway to citizenship for the 11 million illegal immigrants within the first 100 days of his presidency remains to be seen, especially when faced with the possibility of a Senate controlled by the Republican Party. Observers note that the citizenship-for-illegal-immigrants issue had been previously championed by Obama and Nancy Pelosi, speaker of the House of Representatives, but both failed to follow through.

Backbone of the economy

Immigrants for decades have been the backbone of the US economy. Studies show foreign-born adults have a higher participation rate in the labour force than people born in the US, and while 78 per cent of immigrants are of working age, that falls to 59 per cent among America-born adults.

All the while, for Wang the battle to reunite families goes on. He says he has been working with two cases where Chinese parents living in the US have been separated from their children for several years and who today find themselves going through contrasting experiences.

“One of them just got scheduled for an interview [for a visa], the other one has not been given any news for two years,” he says. Wang adds that asylees from Africa living in Cincinnati, Ohio, have suffered particularly badly from recent raids and deportations conducted by the Immigration and Customs Enforcement.

“We soldier on,” he says. “We fight these wars, even though some are unwinnable.”