Research could help doctors to ‘score’ individual Covid-19 cases, and predict how they will develop 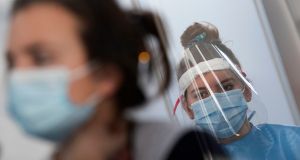 A European hospital-based study led by Dutch scientists has discovered that patients with more active immune cells in their blood may be predisposed to suffer from so-called long Covid – where chronic symptoms persist long after the usual Covid-19 convalescence period.

In a rare piece of good news in an otherwise bleak Dutch coronavirus landscape – where new daily figures remain stubbornly high – the research could help doctors to “score” the seriousness of individual Covid-19 cases and predict how they develop based on changes in a patient’s blood cells.

That “haemocytometric” analysis allowed scientists to search for distinctive patterns in the blood of 982 patients based on age, gender and clinical severity, and, using that data, to develop a panel of indicators to help provide a prognosis during the first three days in hospital.

One of the striking correlations the research found was between “long Covid” – also known as chronic Covid syndrome – and a higher than usual presence of active immune cells in the blood.

Potentially even more important, however, is that changes in the blood may help doctors to predict which patients will recover without ventilation and which are at risk of deterioration and therefore more likely to need intensive care beds and ventilators.

That information will allow Dutch hospitals not just to treat patients more effectively but to use hard-pressed resources more efficiently as they prepare for the likelihood of another spike in cases after Christmas and the new year.

The study was led by Radboud university hospital in the Netherlands, working with 10 hospitals in Germany, Belgium and Italy. It is published in the medical journal eLife, which is supported by the Max Planck Society, the Howard Hughes Medical Institute, and the Wellcome Trust.

With Tuesday’s weekly figures from the public health institute showing 82,340 new cases over the past seven days, the Dutch government is under serious pressure to bring forward the start of mass vaccinations to around January 8th from its delayed target a week ago of around January 18th.

With the second lockdown less than a week old, the R number, indicating the rate at which the virus spreads, stands at 1.25. Despite constant government appeals and mounting fatalities, the last time it dropped below 1 was in mid-October.

“All signals are still on red,” said the institute.

Perhaps because the statistics are moving relentlessly in the wrong direction, a new survey by I&O Research for national broadcaster NOS suggests that the numbers open to vaccination are increasing.

Of the general public 69 per cent are willing to have the jab, rising to 70 per cent among healthcare workers. Those opposed have fallen from 23 per cent to 18 per cent, with a hardcore of about 10 per cent expected to maintain their opposition.

Mental health charities say they are particularly concerned because “the mentally-challenged thrive on routine and on stress-avoidance”.