Masud admitted he built the bomb to Libyan investigators, according to the charges 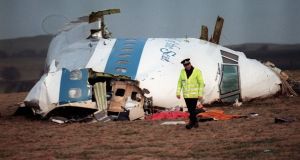 Photograph taken on December 22nd, 1988, shows a policeman walking away from the damaged cockpit of the 747 Pan Am flight that exploded and crashed over Lockerbie, Scotland, with 259 passengers on board. Photograph: Roy Letkey/ AFP via Getty

The US attorney general has announced new charges against a Libyan accused of building the Lockerbie bomb that killed 270 people aboard a Pan Am flight 32 years ago.

William Barr on Monday unveiled charges against Abu Agila Mohammad Masud, who, the US says, admitted to Libyan investigators that he built the device that brought down the plane in 1988.

The charges said Mr Masud had been congratulated for his work by the late Libyan dictator Muammar Gadafy, who accepted responsibility for the bombing on behalf of his country in 2003 but always denied having given the order.

Mr Barr said in a statement: “These charges are the product of decades of hard work by investigators and prosecutors who have remained resolute in their dogged pursuit of justice for [those] that were murdered by terrorists operating on behalf of the former Muammar Gadafy regime.”

The Pan Am flight had just taken off on its way from Heathrow to New York when it exploded over the small Scottish town of Lockerbie. All 259 people on board were killed, in addition to 11 people on the ground.

The subsequent attempts to bring those responsible to justice has lasted several decades and been a regular source of tension between Libya and both the UK and US. Investigators brought charges against two men – Abdel Basset al-Megrahi and Ali Amin Khalifa Fhimah – in 1991, but it took over seven more years for the Gadafy regime to hand over both men for trial.

Megrahi was convicted of murder and served 10 years in Scottish prisons before being released in 2009 on compassionate grounds because he was suffering from terminal cancer. He died three years later in Libya, but earlier this year a Scottish legal review found his conviction may have been a miscarriage of justice.

According to the charges unsealed in Washington on Monday, Mr Masud was arrested in Libya after the Gadafy regime fell in 2011. The US indictment said he gave an interview to a Libyan investigator in 2012 during which he admitted he had built the Lockerbie bomb, and carried out the attack in conjunction with Megrahi and Mr Khalifa Fhimah.

The indictment said Mr Masud had admitted to preparing the explosive device in a suitcase, before flying with it from Libya to Malta, where he handed it to Megrahi and Mr Khalifa Fhimah. He allegedly then flew back to Libya, and later heard about the explosion which brought down the Pan Am flight.

The charges added that Mr Masud and Mr Khalifa Fhimah were summoned to meet Gadafy three months later, where they were congratulated for the bombing.

The charges mark a personal victory for Mr Barr, who was working as acting attorney general in 1991 when the US first brought charges against Megrahi and Mr Khalifa Fhimah.

Mr Barr announced his resignation last week after finding himself at odds with US president Donald Trump over the attorney general’s insistence that there was no evidence of widespread irregularities in last month’s election.

CNN reported that when he told the president of his decision to stand down, he asked to remain in place for an extra week to announce the new Lockerbie charges.

“I know first-hand the toil, tears and sweat that have been poured into pursuing justice for the victims of the Lockerbie bombing and their families,” he said. – Copyright The Financial Times Limited 2020