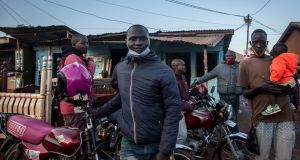 In Kamwokya, a packed slum in the middle of Uganda’s capital city, Kampala, many locals are hesitant to talk about the upcoming elections, despite the posters dotted around them.

“I won’t even vote,” says a 32-year-old who was selling biscuits and sweets on the roadside. “No need. Even if I vote it will remain as it is, nothing will change.”

This slum is where presidential candidate and pop star Bobi Wine grew up. Wine, whose real name is Robert Kyagulanyi Ssentamu, is widely known as “the ghetto president”.

He is facing off against 76-year-old Yoweri Museveni, who has been in power since 1986. The elections are scheduled for January 14th, but they are already the most tense in decades.

Wine’s success – first as a musician and then in politics – has given pride to Kamwokya locals who feel they have been neglected from the country’s political processes for a long time. “If parliament cannot come to the ghetto,” Wine has said, “the ghetto will come to parliament.”

In Kamwokya, a group of boda boda motorbike drivers crowd around to speak about their hero.

“We’re very proud, that is obvious,” says Christopher Muhumza (27). Wine’s music “taught us how to live together, how to endure suffering. What we go through Bobi has gone through. [In] 35 years [Museveni] has done nothing for the common man,” he says.

Muhumza wanted to run for a parliamentary seat himself, but he couldn’t raise the 3 million Ugandan shillings it would have cost to register. In an average day a boda boda driver makes less than 20,000 Ugandan shillings (€4.18), he says. “Poor people have support but don’t have money. The government have made the campaign so expensive.”

In the slum, he says, locals have been hassled for wearing red clothing, including the berets associated with Wine’s People Power movement. They worry about further repercussions from security forces, and now campaign through social media instead.

“We are common people... we see reality, we will support those people who will lift our lives to the next level,” Muhumza tells me. At the moment, “they exclude us in government programmes... We try to survive”.

Wine became involved in politics only in recent years, winning a byelection in 2017. Since then, he has been involved in what is effectively a cat-and-mouse game with authorities, as he is repeatedly arrested and charged with a slew of offences, his supporters teargassed and sometimes shot at by security forces, and his concerts and campaigning banned or obstructed.

Wine himself is quick to say that his candidacy is more about challenging the status quo, rather than promoting specific policy goals. “We have seen from east to west, from north to south, Ugandans are yearning for change,” he said in an interview with tThe Irish Times last year.

During the campaign, Wine has faced questions in relation to his background, including his school records. In August, he revealed that his parents made him lie about his age and repeatedly move schools to save on school fees. “Some well-to-do Ugandans may not understand this, but I am sure the poor people – the ghetto people – understand this kind of life,” he said, when clarifying the discrepancies.

Back in Kamwokya, some residents simply hope the elections don’t result in too much violence, while accepting that the outcome is a foregone conclusion. “They will steal [the result],” says a 52-year-old woman, echoing widespread allegations that the ruling party will rig the election. The mother of five earns 5,000 Ugandan shillings (€1.12) a day selling grilled matoke, a type of savoury banana. She doesn’t have enough capital to increase her sales, she says, and wishes the government would support small businesses.

Nearby, playing Ludo on a giant board with friends, a 39-year-old father of two agrees that Kamwokya is a difficult place to live. “Most people are jobless. People are doing small, small work, here there’s no big business,” he says.

After saying it is okay to print his name, the man backtracks, expressing concern about potential repercussions.

“They don’t allow us to express [our support] for the person we want,” he says. Above him, a line of posters bearing Museveni’s image – much more ubiquitous than those for Wine – smile down.