Maureen Dowd: As men fall, women are rising. Now the gender apartheid has to end 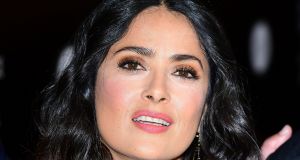 Salma Hayek: “Why do we have to fight tooth and nail to maintain our dignity?” Photograph: Ian West/PA Wire

Jaws drop and drop and drop. Until it seems it will never stop. You would think we would get numb at some point. But no. There are just too many numbskulls. We cannot refresh our browsers fast enough to see the latest stupefactions on sexual violations and Trump violations – which dovetail in a surreal way. Every day, TV anchors breathlessly report some bizarre new insult or accusation or hissy fit or Putin nuzzling by the president, as he wanders around howling in the storm like a late-stage Lear – raging, blowing, spouting, wits turning – in his White House of dark delusions.

The dynamic in the capital grows ever more dangerous, as Donald Trump tells fables to justify the unjustifiable and his staff feed him more fables in a futile attempt to manage his puerile moods. Truth is held hostage to Trump’s ego. The country’s fate – and the world’s – rests on who best flatters America’s Grand Canyon of Need.

As men are falling, women are rising. The gender gap in Virginia and Alabama presages a gender chasm in 2018. Democratic women in Congress have decided they may be able to expel the president on his self-confessed sexual larceny. If they can purge their own party’s offenders and drive women to the polls by whipping up outrage over the absurdity of the nation’s avatar of aspirations and values being immune from the penalties facing other gropers, then they could take back the House and maybe even the Senate and hold hearings on the Harasser in Chief.

“We are not going to let up,” representative Lois Frankel of Florida, chairwoman of the Democratic Women’s Working Group, told the New York Times’s Carl Hulse. “This is so much bigger than us.” The country is going through twin traumas that seem pagan in their lack of decency. With so many grotesque stories tumbling out about marauding men treating women as property or their office as their “stable”, as one former NBC producer said in the case of Matt Lauer, you’d think it would be hard to remain at peak disgust. And yet I felt the revulsion rising yet again as I read Salma Hayek’s Times oped piece about her nightmarish experience with the depraved Harvey Weinstein when she was trying to get her Frida Kahlo movie made with Weinstein producing – and demeaning and threatening and pouncing and punishing.

Hayek recalled that she was “lost in the fog of a sort of Stockholm syndrome”, thinking if she made some compromises – Weinstein demanded she add a full-frontal nude sex scene with Ashley Judd – that he would come to see her as an artist. It perfectly captured the rotten little secret that has long been corroding Hollywood. The industry that helps shape our view of women has fallen into gender apartheid – Saudi Arabia on Sunset Boulevard. Even though women are half of ticket buyers, only 4 per cent of the 100 top-grossing films over the past decade were directed by women. Women make up 11 per cent of writers, 3 per cent of cinematographers, 19 per cent of producers and 14 per cent of editors. The quality of women’s roles, once so rich in the 1930s and 1940s, has atrophied. Last year women comprised only 29 percent of protagonists.

There has been lip service given to fixing the inequality, but no one in power ever raised holy hell about it – not the female studio chiefs, not the male studio executives, not the unions. Hollywood was a warped society and everyone knew it. Gender stereotypes were enshrined in amber: women can’t direct because it’s too risky to trust them with big budgets; they get too emotional; they only want to direct movies where people talk or, God forbid, cry; they don’t have the authority to come across as commanding generals.

That’s why monsters were allowed to roam, feeling entitled to human sacrifices, vulnerable young women offered at the altar of art, ambition and box office. Hayek asks the infuriating key question: “But why do so many of us, as female artists, have to go to war to tell our stories when we have so much to offer? Why do we have to fight tooth and nail to maintain our dignity?” With so many talented women and so many ticket-buying women, why had Hollywood stopped trying “to find out what female audiences wanted to see and what stories we wanted to tell”?

When I wrote a Times Magazine piece two years ago, interviewing scores of female directors, writers, producers and cinematographers and studying their amazing work, I got more and more angry as I realised that these women were being systematically excluded based on ridiculous biases.

I believed the top female producer who told me that it involved something as primitive as men in Hollywood not wanting to be bossed around by women because it made them think of hectoring wives and nagging mothers. There are a lot of well-meaning people with power in Hollywood. But they have looked the other way for far too long on shameful imbalances. As Melissa Silverstein, founder and publisher of Women and Hollywood, told me, “Just because we finally had a successful superhero movie directed by a woman, we now see that we are still really at the beginning.”

Hayek nailed it when she concluded: “Until there is equality in our industry, with men and women having the same value in every aspect of it, our community will continue to be a fertile ground for predators.”

No wonder, given the state of Washington and Hollywood, Dictionary. com chose “complicit” as its word of the year. – New York Times