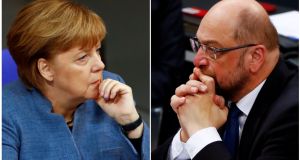 Germany’s Social Democrats (SPD) have floated a confidence and supply-style arrangement as a way to support chancellor Angela Merkel’s fourth term in office.

Ahead of exploratory talks in Berlin on Tuesday, more than 10 weeks after a disastrous federal election, SPD leader Martin Schulz has suggested a “co-operation coalition” deal on a dozen headline policies.

The rest could be negotiated during a four-year term, suggested Mr Schulz, upending Germany’s practice of formal coalitions and detailed government programmes.

Leading SPD strategists believe that, in a looser alliance, voters would give their party greater credit for progressive policies than previously the case in grand coalition.

If blocked by Dr Merkel’s CDU, the SPD would be free to find an alternative parliamentary majority.

SPD general secretary Lars Klingbeil says his party is open to all possibilities, including a renewed coalition with conservatives or a minority government. “The ball is now in Dr Merkel’s court,” said Mr Klingbeil.

After Dr Merkel’s demands for “speedy talks”, Mr Klingbeil said the pace of negotiations depended to a large extent on what concessions Dr Merkel and her allies were prepared to make.

Last week, SPD delegates voted overwhelmingly in favour of open-ended talks with the CDU and its CSU Bavarian allies.

A poll of SPD members for private broadcaster RTL showed 71 per cent favoured such talks while 81 per cent called on the party to push hard.

Dr Merkel is undecided on the first, chilly on the second and increasingly warm – if vague – on the third.

Ahead of Tuesday’s talks, the CDU leader suggested re-opening the Élysée Treaty to allow for closer Franco-German co-operation, such as on harmonised corporate tax rates.

French president Emmanuel Macron is calling for an EU investment fund, managed by a Brussels finance minister. The German leader refuses to be pinned down on EU reform details, but insists the EU offers the best chance for Europe to remain relevant in a globalised world.

“I believe that is a historical necessity and I don’t think I am exaggerating when I say the world is waiting for us to be able to act,” she said.

“Europe doesn’t just need a stronger economic and monetary union, we must also have a Europe of security and the rule of law, internally and externally.”