The truth is out there: The Pentagon’s $110m UFO programme

Are UFOs real? For five years, a Pentagon investigation tried to find out 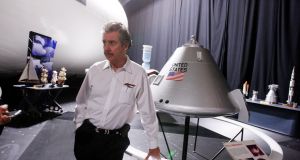 In the $600 billion annual US defence department budgets, the $22 million spent on the Advanced Aerospace Threat Identification programme was almost impossible to find. Which was how the Pentagon wanted it. For years, the programme investigated reports of unidentified flying objects, according to defence department officials, interviews with programme participants and records obtained by the New York Times. It was run by a military intelligence official, Luis Elizondo, on the fifth floor of the Pentagon’s C Ring, deep within the building’s maze.

The defence department has never before acknowledged the existence of the programme, which it says it shut down in 2012. But its backers say that, while the Pentagon ended funding for the effort at that time, the programme remains in existence. For the past five years, they say, officials with the programme have continued to investigate episodes brought to them by service members, while also carrying out their other defence department duties.

Parts of it remain classified began in 2007, and initially it was largely funded at the request of Harry Reid, the Nevada Democrat who was the Senate majority leader at the time and who has long had an interest in space phenomena. Most of the money went to an aerospace research company run by a billionaire entrepreneur and longtime friend of Reid’s, Robert Bigelow, who is working with NASA to produce expandable craft for humans to use in space.

On CBS’ 60 Minutes in May, Bigelow said he was “absolutely convinced” that aliens exist and that UFOs have visited earth. Working with Bigelow’s Las Vegas-based company, the programme produced documents that describe sightings of aircraft that seemed to move at very high velocities with no visible signs of propulsion, or that hovered with no apparent means of lift.

Officials with the programme have also studied videos of encounters between unknown objects and US military aircraft including one released in August of a whitish oval object, about the size of a commercial plane, chased by two Navy F/A-18F fighter jets from the aircraft carrier Nimitz off the coast of San Diego in 2004.

Reid, who retired from Congress this year, said he was proud of the programme. “I’m not embarrassed or ashamed or sorry I got this thing going,” Reid said in a recent interview in Nevada. “I think it’s one of the good things I did in my congressional service. I’ve done something that no one has done before.”

Two other former senators and top members of a defence spending subcommittee, Ted Stevens, (Republican-Alaska), and Daniel Inouye, (Democrat-Hawaii) also supported the programme. Stevens died in 2010, and Inouye in 2012. While not addressing the merits of the programme, Sara Seager, an astrophysicist at the Massachusetts Institute of Technology, cautioned that not knowing the origin of an object does not mean that it is from another planet or galaxy. “When people claim to observe truly unusual phenomena, sometimes it’s worth investigating seriously,” she said. But, she added, “what people sometimes don’t get about science is that we often have phenomena that remain unexplained.”

James Oberg, a former NASA space shuttle engineer and the author of 10 books on spaceflight who often debunks UFO sightings, was also doubtful. “There are plenty of prosaic events and human perceptual traits that can account for these stories,” Oberg said. “Lots of people are active in the air and don’t want others to know about it. They are happy to lurk unrecognised in the noise, or even to stir it up as camouflage.”

Still, Oberg said he welcomed research. “There could well be a pearl there,” he said. In response to questions from the New York Times, Pentagon officials this month acknowledged the existence of the programme, which began as part of the Defence Intelligence Agency. Officials insisted that the effort had ended after five years, in 2012.

“It was determined that there were other, higher priority issues that merited funding, and it was in the best interest of the DoD to make a change,” a Pentagon spokesman, Thomas Crosson, said in an email, referring to the Department of Defence.

But Elizondo said the only thing that had ended was the effort’s government funding, which dried up in 2012. From then on, Elizondo said in an interview, he worked with officials from the navy and the CIA. He continued to work out of his Pentagon office until this past October, when he resigned to protest what he characterized as excessive secrecy and internal opposition.

“Why aren’t we spending more time and effort on this issue?” Elizondo wrote in a resignation letter to defence secretary Jim Mattis. Elizondo said that the effort continued and that he had a successor, whom he declined to name. UFOs have been repeatedly investigated over the decades in the United States, including by the military. In 1947, the Air Force began a series of studies that investigated more than 12,000 claimed UFO sightings before it was officially ended in 1969. The project, which included a study code-named Project Blue Book, started in 1952, concluded that most sightings involved stars, clouds, conventional aircraft or spy planes, although 701 remained unexplained.

Robert C Seamans jnr, the secretary of the Air Force at the time, said in a memorandum announcing the end of Project Blue Book that it “no longer can be justified either on the ground of national security or in the interest of science.”

Reid said his interest in UFOs came from Bigelow. In 2007, Reid said in the interview, Bigelow told him that an official with the Defence Intelligence Agency had approached him wanting to visit Bigelow’s ranch in Utah, where he conducted research.

Reid said he met with agency officials shortly after his meeting with Bigelow and learned that they wanted to start a research programme on UFOs. Reid then summoned Stevens and Inouye to a secure room in the Capitol. “I had talked to John Glenn a number of years before,” Reid said, referring to the astronaut and former senator from Ohio, who died in 2016. Glenn, Reid said, had told him he thought that the federal government should be looking seriously into UFOs, and should be talking to military service members, particularly pilots, who had reported seeing aircraft they could not identify or explain.

The sightings were not often reported up the military’s chain of command, Reid said, because service members were afraid they would be laughed at or stigmatized. The meeting with Stevens and Inouye, Reid said, “was one of the easiest meetings I ever had.” He added, “Ted Stevens said, ‘I’ve been waiting to do this since I was in the Air Force.’” (The Alaska senator had been a pilot in the Army’s air force, flying transport missions over China during the second World War.) During the meeting, Reid said, Stevens recounted being tailed by a strange aircraft with no known origin, which he said had followed his plane for miles. None of the three senators wanted a public debate on the Senate floor about the funding for the programme, Reid said. “This was so-called black money,” he said. “Stevens knows about it, Inouye knows about it. But that was it, and that’s how we wanted it.” Reid was referring to the Pentagon budget for classified programmes.

Contracts obtained by the New York Times show a congressional appropriation of just under $22 million beginning in late 2008 through 2011. The money was used for management of the programme, research and assessments of the threat posed by the objects. The funding went to Bigelow’s company, Bigelow Aerospace, which hired subcontractors and solicited research for the programme. Under Bigelow’s direction, the company modified buildings in Las Vegas for the storage of metal alloys and other materials that Elizondo and programme contractors said had been recovered from unidentified aerial phenomena. Researchers also studied people who said they had experienced physical effects from encounters with the objects and examined them for any physiological changes. In addition, researchers spoke to military service members who had reported sightings of strange aircraft.

The programme collected video and audio recordings of reported UFO incidents, including footage from a Navy F/A-18 Super Hornet showing an aircraft surrounded by some kind of glowing aura travelling at high speed and rotating as it moves. The Navy pilots can be heard trying to understand what they are seeing. “There’s a whole fleet of them,” one exclaims. Defence officials declined to release the location and date of the incident.

“Internationally, we are the most backward country in the world on this issue,” Bigelow said in an interview. “Our scientists are scared of being ostracized, and our media is scared of the stigma.

China and Russia are much more open and work on this with huge organisations within their countries. Smaller countries like Belgium, France, England and South American countries like Chile are more open, too. They are proactive and willing to discuss this topic, rather than being held back by a juvenile taboo.”

By 2009, Reid decided that the programme had made such extraordinary discoveries that he argued for heightened security to protect it. “Much progress has been made with the identification of several highly sensitive, unconventional aerospace-related findings,” Reid said in a letter to William Lynn III, a deputy defence secretary at the time, requesting that it be designated a “restricted special access programme” limited to a few listed officials.

A 2009 Pentagon briefing summary of the programme prepared by its director at the time asserted that “what was considered science fiction is now science fact,” and that the United States was incapable of defending itself against some of the technologies discovered. Reid’s request for the special designation was denied.

Elizondo, in his resignation letter of October 4th, said there was a need for more serious attention to “the many accounts from the Navy and other services of unusual aerial systems interfering with military weapon platforms and displaying beyond-next-generation capabilities.” He expressed his frustration with the limitations placed on the programme, telling Mattis that “there remains a vital need to ascertain capability and intent of these phenomena for the benefit of the armed forces and the nation.”

Elizondo has now joined Puthoff and another former defence department official, Christopher Mellon, who was a deputy assistant secretary of defence for intelligence, in a new commercial venture called To the Stars Academy of Arts and Science. They are speaking publicly about their efforts as their venture aims to raise money for research into UFOs.

In the interview, Elizondo said he and his government colleagues had determined that the phenomena they had studied did not seem to originate from any country. “That fact is not something any government or institution should classify in order to keep secret from the people,” he said.

For his part, Reid said he did not know where the objects had come from. “If anyone says they have the answers now, they’re fooling themselves,” he said. “We do not know.” But, he said, “we have to start someplace.”–New York Times