Hillary Clinton ‘thinking about’ running for presidency in 2016 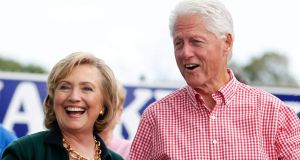 Former US secretary of state Hillary Clinton and her husband, former US president Bill Clinton, at the Harkin ‘steak fry’ in Indianola, Iowa. Photograph: Reuters/Jim Young

Hillary Clinton has sent another strong signal that she may run for the presidency in 2016 when she returned to the politically significant state of Iowa in the American midwest for the first time since she lost a caucus election there in her unsuccessful 2008 presidential run.

In her most political speech since resigning as secretary of state last year, Ms Clinton offered little new about whether she had decided to run in 2016, but her visit to Iowa intensifies expectation that she will.

“It’s true,” the former New York senator told at a crowd of about 10,000 Democratic supporters, “I am thinking about it.” Among the crowd were thousands of supporters bedecked in Ready for Hillary paraphernalia, an independent group pushing her to run.

Accompanied by husband, former president Bill Clinton, she attended the last “steak fry” hosted by Iowa’s Democratic senator Tom Harkin on Sunday, as his retirement leaves a seat that Republicans believe they can win in their bid to regain control of the Senate.

“It’s been seven years and a lot has changed,” she told the crowd in a state that delivered a damaging early hit to her 2008 campaign. Ms Clinton came third behind Barack Obama and John Edwards, the former North Carolina senator, in Iowa’s Democratic caucus.

Iowa is the first state in the nation to vote in the presidential election year, generating intense national interest in this largely agricultural state.

Ms Clinton however focused on November’s congressional midterm elections. She pushed the crowd to support Democrat Senate candidate Bruce Braley, who is battling Republican nominee Joni Ernst, and Staci Appel, who is hoping to become the first female congresswoman elected from Iowa if she wins in November.

Ms Clinton is leading the 2016 presidential polls, including in Iowa, and has mobilised stronger support than she did in the 2008 campaign.