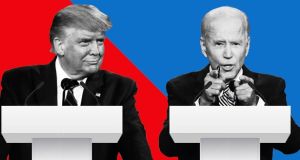 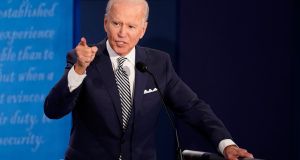 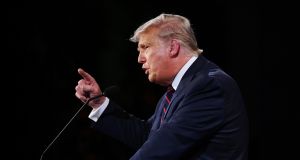 President Donald Trump went on the attack last night, as the first presidential debate of the US election campaign descended into chaos and acrimony.

In the first face-to-face debate between Mr Trump and his Democratic rival Joe Biden, the two candidates clashed on issues including coronavirus, the economy and white supremacy.

But the debate will be remembered for the repeated interruptions by Mr Trump, and the often personal clashes between the two men.

“I’m not here to call out his lies. Everybody knows he’s a liar,” said Mr Biden of the president in the opening minutes, as he struggled to make himself heard during an often scrappy and ill-tempered debate.

“Will you shut up man?” he said at another point, later denouncing Mr Trump as a “clown.”

Mr Trump for his part accused Mr Biden of misrepresenting his college record, during a debate segment about Covid-19. “Don’t ever use the word smart with me,” he said to his rival. “There’s nothing smart about you Joe.”

Asked if he would condemn white supremacy, Mr Trump replied: “Sure. I’m willing to do that,” but quickly added: “Almost everything I see is from the left wing. Not from the right wing.”

He continued: “Proud Boys, stand back and stand by,” an apparent reference to a far-right, neo-fascist group.

Asked about the issue of election security, Mr Trump repeated his attacks on postal voting, predicting that November’s election will be rigged.

“This is not going to end well,” he said in one of the final comments of the night, during a discussion on election security.

“If I see tens of thousands of ballots being manipulated, I can’t go along with that… It means you have a fraudulent election.”

Asked by moderator Chris Wallace if he would urge his supporters to stay calm and not engage in any civil unrest if there is a delay in learning the final result of the presidential election, Mr Trump said that that he was urging his supporters to “go into the polls and watch very carefully.”

Mr Biden said that he would accept the outcome of the election, adding: “I’ll be a president for Democrats and Republicans.”

Mr Wallace, a respected interviewer with Fox News with a reputation for independence, struggled to maintain order during the 90-minute debate.

“I hate to raise my voice but why should I be different than the two of you,” he said at one juncture. He repeatedly urged Mr Trump to stop interrupting.

“Mr President I am the moderator of this debate and I’d like you to let me ask my question,” he said.

Among the topics discussed during the debate was coronavirus and the ongoing Supreme Court controversy.

Mr Trump defended his right to appoint a successor to the late Ruth Bader Ginsburg so close to an election, pointing out that he had been elected for a four-year term.

But Mr Biden said that the process of appointing a new Supreme Court justice should wait until after the election. “The American people have a right to have a say on who the Supreme court nominee is…they’re not going to get that chance now.”

Mr Biden said that Mr Trump’s pick, Amy Coney Barrett, had previously written that the Affordable Care Act was not constitutional, also pointing out that the Trump administration was trying to abolish the healthcare policy known as Obamacare.

But Mr Trump denied that he was trying to undermine health care provision for people, during one of the few substantive policy discussions of the evening.

After Mr Biden raised Mr Trump’s links with Russia, the president attacked his son Hunter’s business connections in the region and in China. Mr Biden said the allegations were “not true.”

Later in the debate, he discussed his late son Beau’s military record in Iraq, rebuking the president for his alleged comments that military veterans were “losers.”

“My son was in Iraq. He was not a loser. He was a patriot. And the people left behind were heroes.”

It was one of the few moments in the debate that Mr Biden turned to face his opponent and address him directly.

But Mr Trump quickly pivoted again to Mr Biden’s son Hunter, prompting Mr Biden to say that while he had previously struggled with drug problems, he had overcome them.

“My son, like a lot of people we know at home, had a drug problem. He’s overtaken it. He’s fixed it. He’s worked on it. And I’m proud of him,” he said into the camera.

During a segment on the environment, Mr Trump said that he believed in climate change “to an extent,” saying that his aim was to have “crystal-clean water and air. I want beautiful, clean air.”

Mr Biden for his part pledged to rejoin the Paris Climate Accord if he is elected president.

Tuesday night’s debate in Cleveland, Ohio took place five weeks before election day, with polls showing that Mr Biden is ahead in the polls nationally, and in key swing states. Members of both candidates’ families were present in the debate hall, in addition to a handful of ticketed guests.

The second debate is scheduled for October 15th in Miami, with the final debate a week later in Nashville, Tennessee.