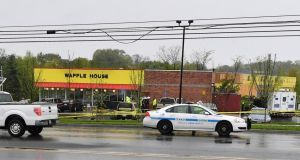 The gunman, armed with what was described as an AR-15 style assault rifle, walked into the Waffle House restaurant in Antioch, in suburban Nashville, shortly before 3.30am (9.30am Irish time). Photograph: Jason Davis/Getty Images

A man who was naked but for a green jacket killed at least four people and wounded at least three others at a restaurant near Nashville, Tennessee, early on Sunday, authorities said.

The gunman, armed with what was described as an AR-15 style assault rifle, walked into the Waffle House restaurant in Antioch, in suburban Nashville, shortly before 3.30am (9.30am Irish time).

The man opened fire on the patrons, the Metro Nashville Police said in a statement on Twitter, adding that: “A patron wrestled away the gunman’s rifle.”

The gunman’s vehicle was registered to Travis Reinking (29) of Morton, Illinois, who police identified as a person of interest in the shooting.

One of the injured died at Vanderbilt University Medical Center, said hospital spokeswoman Jennifer Wetzel. Two others still at the hospital are in critical but stable condition, she said.

It was not immediately known where the fourth person was being treated.

Police told CNN the man shed his jacket before fleeing on foot. A shirtless man wearing pants who was believed to be Reinking was spotted in woods near the restaurant, police said.

Police were searching for the man early Sunday and it was unclear if he had another weapon. Local media reported that a second shooting nearby might be connected to this incident.

The public was cautioned that the man was to be considered still armed and extremely dangerous. – Reuters