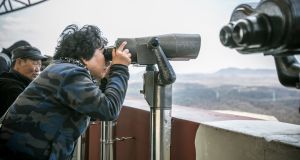 Less than four months ago North and South Korea teetered on the precipice of conflict. Now officials in Seoul are openly discussing a peace treaty to bring an end to the officially unfinished Korean war.

The accelerating rapprochement has raised alarms that the administration of President Moon Jae-in is moving too quickly to secure a deal without obtaining proper concessions from the dictatorship in Pyongyang.

The flurry of diplomatic overtures also suggests to analysts that Moon’s team has already secured a broad outline of a deal ahead of the South Korean president’s meeting with Kim Jong-un, North Korea’s supreme leader, on April 27th.

“This whole thing is moving very fast. Four months ago, it was all ‘fire and fury’ and all of a sudden we’re talking about a peace treaty?” said Robert Kelly, a professor at Busan National University. “Moon is hyping [the summit next week]. It makes me wonder have they pre-negotiated a big deal.”

A successful summit between Moon and Kim is seen as a crucial stepping stone for a later meeting between the North Korean leader and US president Donald Trump.

Trump hopes that meeting – expected in May or early June – can pave the way for North Korea to abandon its nuclear weapons and advanced ballistic missiles.

For his part, Moon appears intent on providing that foundation. Im Jong-seok, the president’s chief of staff, said Kim planned to formally announce his willingness to abandon nuclear weapons at the summit.

Top officials also say the goal of the meeting – just the third between leaders of the two Koreas – should be to sign a peace treaty to officially end the military stand-off on the peninsula.

Expectations of a pre-planned deal have been further bolstered by Seoul’s request to hold a joint press conference following the summit in the demilitarised zone between the two Koreas. The presidential Blue House has also launched a website to provide live updates of developments.

“They are focusing on the atmospherics. The inter-Korean summit is largely intended to set up the US-North Korea summit. They need this one to go well,” said Duyeon Kim, a visiting senior fellow at the Korean Peninsula Future Forum in Seoul.

Lee Jong-nam, a North Korea expert at Korea University, said: “The two sides seem to have already reached an agreement on major principles such as denuclearisation and a peace treaty, but the question is how they will execute the plans. The US and North Korea still seem far apart over their [denuclearisation] road map.”

The US and South Korea have been allies since Washington intervened to prevent communist North Korea from overrunning the ostensibly capitalist South during the Korean war in the 1950s.

But many South Koreans, including top Blue House advisers, still view North Korea as an estranged sibling and wish to reunite. Moon has made inter-Korean reconciliation a key plank of his presidential agenda.

“For the Moon administration, drawing public support for the inter-Korean summit is very important so it is trying to send out the most positive messages about it. Voices opposed to the summit or anti-North Korean comments are not welcome,” said Lee.

A number of prominent critics of North Korea have found themselves sidelined from appearing on television or at public events in recent months – a development they attribute to pressure from the Seoul government.

Kelly said there could be a public backlash if a deal with North Korea was “made in the dark”. He added that North Korea had yet to agree any real concessions, such as allowing outside inspections, on its nuclear programme.

Pyongyang has said it is willing to denuclearise, although it has not offered any details. Few experts are convinced Kim will go through with a process that would fundamentally imperil the regime’s external security.

“Verifying North Korea’s denuclearisation is a very difficult, complex matter. It already has an ability to make nuclear weapons, so it can break its promises at any time,” said Kim Ki-ho, professor at Kyonggi University. “Still, both Washington and Seoul seem to prefer the illusion of peace rather than the risk of war ahead of key elections in both countries.”

Signing a peace treaty would likely mean that UN and US forces, which uphold the armistice between the Koreas, would be obliged to leave the peninsula.

“If US troops pull out of South Korea, we lose effective means for dealing with North Korea’s provocations if Pyongyang decides to break the agreement,” said Kim Ki-ho.

“Despite the government’s rosy outlook, there are still concerns about whether [these summits] can really bring peace to the peninsula. Many people remain anxious about North Korea’s intention and whether we can trust Pyongyang as a negotiating partner.” – Copyright The Financial Times Limited 2018