A Belgian judge has granted conditional release to sacked Catalan leader Carles Puigdemont and four of his ministers, and the group is scheduled to appear at court within 15 days. Video: Reuters 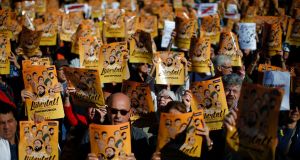 Demonstrators hold banners that read in Catalan: “Freedom for the Political Prisoners”, at a protest against the decision to jail ex-members of the Catalan government at University Square in Barcelona, Spain, on Sunday. Photograph: Manu Fernandez/AP Photo

A Belgian judge has granted conditional release to sacked Catalan leader Carles Puigdemont and four of his ministers, and the group is scheduled to appear in court within 15 days, Belgian prosecutors said early on Monday.

Mr Puigdemont, who volunteered himself to Belgian police after Spain issued a European arrest warrant for rebellion and misuse of public funds, is barred from leaving Belgium without a judge’s consent.

“The next step in the proceedings is the appearance of the five defendants before the Chambre du Conseil within the next 15 days,” prosecutors said in a statement.

Mr Puigdemont and his four associates had gone to Belgian police on Sunday, the Brussels prosecutor’s office said, following Spain’s issuing of the arrest warrant.

He is wanted by Madrid for actions related to his push for the region’s secession from Spain.

Belgian state broadcaster VRT said that all five arrived at the Brussels prosecutor’s office. The prosecutor was due to make a statement about the European arrest warrant issued for the five. Federal prosecutors in Belgium had said on Saturday that they were studying the warrants and that they had shared them with city counterparts in Brussels.

Mr Puigdemont had travelled to Belgium shortly after Madrid took control of the region and faces charges for rebellion, sedition, misuse of public funds, disobedience and breach of trust relating to the secessionist campaign. On Saturday, Mr Puigdemont called for a united Catalan political front in the face of the elections.

On Thursday, nine members of his sacked cabinet were ordered by Spain’s High Court to be held on remand pending an investigation and potential trial. One member of the dismissed cabinet, Santi Vila, was freed after paying bail of €50,000 on Friday. The other eight could remain in custody for up to four years.

Meanhile, a poll published on Sunday shows pro-Catalonia independence parties will combine for the most votes in regional election in December but may fall just short of a majority needed to revive the secession campaign.

According to the GAD3 survey of 1,233 people conducted between October 30th and November 3rd and published in La Vanguardia newspaper, pro-independence parties ERC, PDECat and CUP would take between 66 and 69 seats in the 135-seat parliament.

Catalonia’s statehood push has tipped Spain into its worst political crisis since its return to democracy four decades ago as surging pro-secession sentiment in the region has in turn kindled nationalism across the country.

A second poll, in the conservative newspaper La Razon, echoed the GAD3 survey on Sunday, showing pro-independence parties would capture the most votes though still fall just shy of a parliamentary majority with 65 seats. – Reuters