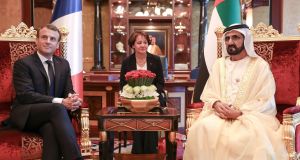 French president Emmanuel Macron has claimed victory over the Islamic State terror group, two years after the attacks in Paris in which 130 people were killed.

Speaking to servicemen and women at the French naval base in Abu Dhabi on Thursday, Mr Macron noted that the attacks of November 13th, 2015 were “planned, organised and directed from” Raqqa.

The town in northern  Syria was the de facto capital of Islamic State’s “caliphate”. It fell last month to the US-led coalition, in which France participates.

“Almost two years to the day after these attacks, we have won,” Mr Macron said, prompting comparisons with George W Bush’s premature declaration of a US “mission accomplished” in Iraq.

“We won in Raqqa, and I believe profoundly that the coming weeks and months will enable us to win completely on the military level in the Iraqi-Syrian zone,” Mr Macron said.

“But the battle will not be over,” he continued. “Long-term stabilisation and the struggle against all the residual terrorist groups will be indispensable compliments to the inclusive, plural political solution that we want to see.”

Mr Macron told French military personnel: “What is being played out here is the fight against terrorism, all forms of its financing and its organisation throughout this region.”

France and the United Arab Emirates are organising a conference on the financing of terrorism next year.

Alluding to the extreme tension between Iran and Saudi Arabia and their respective allies, Mr Macron warned of “the return of relations based on force” and “the temptation to militarise relations between states”.

Mr Macron implicitly criticised US president Donald Trump’s refusal to certify Iran’s compliance with the July 2015 nuclear accord as “the questioning of international treaties and institutions”.

The French leader spoke of the expected return to France of hundreds of French men and women who had gone to Raqqa to support Islamic State, also known as Isis. He said male returnees would be tried and imprisoned, while women and children would be dealt with “on a case-by-case basis”.

Iraqi court decisions regarding French citizens would be respected, Mr Macron said. “Children who have returned and who will return will receive close medical and psychiatric attention.”

On Monday, Mr Macron will commemorate the second anniversary of the Paris attacks by laying wreaths at the Stade de France, at the Petit Cambodge, Carillon and Belle Équipe cafés, and the Bataclan concert hall, where 90 people died. There will be no speeches.

Mr Macron’s predecessor, Francois Hollande, is expected to join him, though their relations are strained.

The fund for victims of terrorism announced this week that it has paid out €64 million to 2,579 people in connection with the November 13th attacks. They include 1,218 people who were psychologically wounded, 576 who were physically wounded, and 758 relatives of those killed.

Terrorism continues to occupy a prominent place in French news. Marine Le Pen, the leader of the extreme right-wing Front National, has reacted angrily to the lifting of her immunity as a deputy in the French National Assembly.

She has been charged with “distributing violent images”, having tweeted three photographs of decapitated victims of Islamic State on December 16th, 2015, with the caption, “This is Daesh”, in reference to the Arabic acronym for Islamic State.

“It’s better to be a jihadist returning from Syria than a deputy denouncing the ignominy of Islamic State,” Le Pen told the Agence France Presse. If convicted, she could face up to three years in prison and a €75,000 fine.

Blurred photographs of Abdelkader Merah and his mother, Zoulikha Aziri, in a Paris courtroom have also raised controversy. Merah was last week sentenced to 20 years in prison for “association with terrorists” in connection with a 2012 shooting rampage in which his younger brother, Mohamed, killed seven people. Paris Match magazine defied the law against photography in courtrooms by publishing the images.

In Caen, northern France, a 34-year-old man has been sentenced to six months in prison for “defending terrorism”. He owned football jerseys emblazoned with the names Bin Laden, Mullah Omar, Abu Hamza and Chemical Ali.

The Paris prosecutor’s office has opened a preliminary investigation into death threats against Charlie Hebdo, the target of a jihadist attack that killed 12 people in January 2015.

The satirical magazine’s cover dated November 1st showed a cartoon of Muslim theologian Tariq Ramadan with his trousers deformed by an erection. “Rape, the defence of Tariq Ramadan: ‘I am the sixth pillar of Islam!’” is the title.