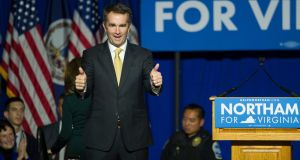 Voters delivered their first forceful rebuke of President Donald Trump and his party on Tuesday night, with Democrats exploiting Mr Trump’s deep unpopularity to capture the governorships in Virginia and New Jersey and make significant inroads into suburban communities that once favoured the Republican Party.

The Democratic Party’s crowning success of the night came in Virginia, where Ralph Northam, an understated physician and army veteran, won a commanding victory for governor, overcoming a racially charged campaign by his Republican opponent and cementing Virginia’s transformation into a reliably Democratic state largely immune to Trump-style appeals.

Mr Northam was propelled to victory over Ed Gillespie, the Republican nominee, by liberal and moderate voters who were eager to send a message to Mr Trump in a state that rejected him in 2016. The campaign between a pair of low-key, establishment politicians was brought to life when Mr Gillespie injected a handful of wedge issues, from immigration to Confederate iconography, into the race. But voters in Virginia’s affluent and highly educated urban centres overwhelmingly rejected those tactics, handing Mr Northam enormous margins in the state’s most vote-rich localities.

The Democrats’ electoral validation, though, took place well beyond the Virginia governor’s race: They wrested the governorship of New Jersey away from Republicans, swept two other statewide offices in Virginia and made gains in the Virginia legislature, and won a contested mayoral race in New Hampshire.

In New Jersey, Philip Murphy, a former Goldman Sachs executive, won the governorship by a vast margin that brought an unceremonious end to governor Chris Christie’s tumultuous tenure. In both Virginia and New Jersey, voters rebuffed a wave of provocative ads linking immigration and crime, suggesting the limitations of hard-edge tactics in the sort of affluent and suburban communities that are pivotal in next year’s midterm elections.

Even though Republicans in the two states mirrored Mr Trump’s grievance-oriented politics, they kept him at arm’s length: He became the first president not to appear for gubernatorial candidates in either state since 2001, when George W Bush shunned the trail after the September 11th attacks.

Since then, four of the five governors Virginia has elected have been Democrats. Mr Northam’s victory also handed Democrats a stronger hand to block any Republican attempts at gerrymandering after the next census, in 2020. US

Republican Scott Taylor said he considered the Democratic sweep in Virginia a repudiation of the White House. He faulted Mr Trump’s “divisive rhetoric” for propelling the party to defeat, and said he believed traditionally Republican-leaning voters contributed to Mr Northam’s margin of victory.

“I do believe that this is a referendum on this administration,” Mr Taylor said of the elections. “Democrats turned out tonight, but I’m pretty sure there were some Republicans who spoke loudly and clearly tonight as well.”

Channelling the shock of Republicans across the state, Mr Taylor voiced disbelief at the party’s rout down ballot. “I know folks that lost tonight who were going against candidates I’d never even heard of,” he said.

Mr Trump was quick to fault Mr Gillespie for keeping his distance, writing on Twitter while travelling in South Korea that the Republican candidate “did not embrace me or what I stand for”.

Mr Gillespie made no mention of Mr Trump in his concession speech, and alluded only in passing to the explosive themes that he wielded as a candidate. Ticking off kitchen-table issues he campaigned on, Mr Gillespie noted his supporters were worried about “safety for themselves and their families and their businesses”, among other concerns.

Addressing supporters in a hotel ballroom, Mr Gillespie tried to tack a courteous finale on to a rough-and-tumble race, offering his assistance to Mr Northam going forward. “I wish him nothing but the best success,” Mr Gillespie said.

Mr Northam’s victory was a tonic to an anxious national party that has been reeling since Mr Trump’s win last year and was demoralised by losses in special House elections in Montana and Georgia. – New York Times