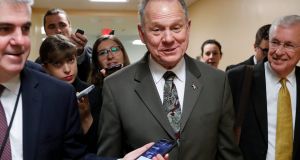 Alabama’s Republican candidate for the US Senate Roy Moore (centre) sparked controversy while chief justice on the Alabama supreme court by commissioning a large granite monument inscribed with the 10 Commandments to be placed in front of the court. Photograph: Jonathan Ernst/Reuters

Roy Moore, the controversial Republican frontrunner for a senate seat in Alabama, has been urged to withdraw from the race, following reports that he sexually harassed a teenage girl when he was in his 30s.

The Washington Post reported that Mr Moore, a former state judge who defeated senator Luther Strange in the Republican primary in September, took Leigh Corfman to his house in 1979 and initiated sexual activity with the 14-year-old, it has been alleged.

Several other women have claimed that Mr Moore pursued them while they were teenagers, the Washington Post reported. In a statement, the Moore campaign rejected the allegations calling them “a baseless political attack” and “the very definition of fake news and intentional defamation”.

Senator John McCain led calls for Mr Moore to stand down ahead of next month’s election. “The allegations against Roy Moore are deeply disturbing and disqualifying. He should immediately step aside and allow the people of Alabama to elect a candidate they can be proud of,” he tweeted.

Senate majority leader Mitch McConnell also called on the Republican nominee to withdraw if the reports are true. “If these allegations are true, he must step aside,” he said. Mr McConnell, the top Republican in the Senate was one of the many Republican establishment figures who backed Mr Moore’s rival Luther Strange, a more traditional Republican, in the primary contest to choose the Republican nominee to contest the senate seat vacated by Jeff Sessions who was appointed attorney general by Donald Trump. The election is scheduled for December 12st.

Mr Moore sparked controversy while chief justice on the Alabama supreme court by commissioning a large granite monument inscribed with the 10 Commandments to be placed in front of the court. Seen as an anti-establishment candidate, he arrived to cast his vote in the Republican primary on horseback.

As the controversy over the man who was expected to become the next member of the 100-member Senate emerged on Thursday, Senate Republicans unveiled their much-anticipated tax reform proposal, setting the stage for a difficult battle within their own party as Republicans try to secure a tax reform package by the end of the year.

In a departure from the House of Representative’s plan agreed last week, Senate Republicans want to defer a reduction in the corporate tax rate to 2019, a move that risks the ire of Mr Trump.

The Senate plan also proposes eliminating the system whereby tax-payers can deduct state and income taxes from their federal tax bill – a change that would disproportionately affect wealthy suburban voters. This has particularly worried Republicans in the House of Representatives who represent many of these communities in Congress. In contrast, in the Senate, those areas tend to be represented by Democrats, easing the pressure on Senate Republicans not to repeal those taxes.

A series of election defeats this week for Republicans, which saw Democrats win two gubernatorial races in New Jersey and Virginia and Republicans lose control of the Virginia state House of Delegates, has increased pressure on the Republican party to limit the political fallout from their ambitious plans for tax reform.