Kurdish man in Ireland: ‘My dad is 85. Last night, until 1am, he was packing his luggage’ 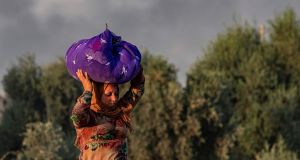 A woman carries her belongings over her head as she flees Syria’s northeastern town of Ras al-Ain on October 9th. Photograph: Delil Souleiman/AFP/Getty

A Kurdish man living in Ireland has said his elderly father has packed his bags and is planning to leave his home in northern Syria after Turkey began its military incursion into the region on Wednesday.

Ahmad Bekkî, originally from Kobanî, northern Syria has been living in Ireland for over ten years with his wife and their children.

“My dad is 85 years of age. Last night, until 1am, he was packing his luggage. He has all his luggage and baggage in front of the main door and he doesn’t know when he’s going to head out of the city,” he said.

“My two brothers already left. They saw the smoke and the dark clouds in the sky of city so they have to leave. My dad is an old man and he doesn’t want to leave until right up until the last moment.

Mr Bekkî said members of the Kurdish community in Ireland remain “positive” and is keeping in contact with family members in northern Syria.

“Most of them are positive. Our history, especially in the last century, we have faced many, many massacres. We’ve been in this situation, we’ve got used to it. We’ve been treated badly, we knew that Mr Trump would withdraw. We knew this time was going to come.”

Announcing the operation, code-named Peace Spring, President Recep Tayyip Erdogan said Turkey’s mission was to “prevent the creation of a terror corridor across our southern border, and to bring peace to the area”.

Mr Erdogan, who spoke by phone to Russian president Vladimir Putin before the invasion, wants to establish what he terms a “safe zone” along Syria’s border with Turkey.

It is expected the Turkish military may ultimately lay siege to the border towns of Kobanî, Tal Abyad and Ras al-Ayn.