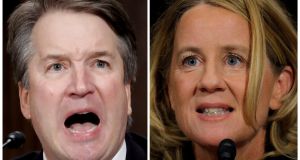 Two weeks of chaos clouding Judge Brett Kavanaugh’s Supreme Court confirmation process culminated Thursday in a hearing that was stunning, even in a town notorious for partisan pageantry and intrigue.

Christine Blasey Ford, the first accuser to come forward and accuse Kavanaugh of grave sexual misconduct, says he assaulted her when they were teenagers, pushing her onto a bed, groping her, grinding his body against hers and covering her mouth with his hand when she tried to scream.

Viewers across the country – including a critical group of undecided senators who will decide the confirmation – were captivated as Blasey Ford came forward to tell her story and Kavanaugh fought to clear his name and salvage his spot on the nation’s highest court.

Here are the takeaways.

Dressed in a navy suit, Blasey Ford maintained her composure throughout the hearing, although her voice often broke or shook as she detailed in raw testimony how “Brett’s assault on me drastically altered my life.” Asked to relive the night of her assault in front of a majority-male panel of senators, she described the “uproarious laughter” of Kavanaugh and Mark Judge, who she said were “having fun at my expense.” She also emphatically denied theories circulating among some conservatives, including some on the Judiciary Committee, that she had incorrectly identified her attacker. Asked if she was certain that Kavanaugh assaulted her, she replied, “100 percent.”

Also striking in Blasey Ford’s testimony was the clinical language she employed. A research psychologist by training, Blasey Ford turned to her field’s vocabulary to describe how she processed the trauma of her alleged assault. When asked how she remembers that it was Kavanaugh and not another person who attacked her, she cited the neurotransmitters that code “memories into the hippocampus and so the trauma-related experience is locked there whereas other details kind of drift.”

Blasey Ford also addressed theories that her motivations for coming forward were partisan, and she described the torment she felt in the months leading up to hearing. “I struggled with a terrible choice: Do I share the facts with the Senate and put myself and my family in the public spotlight?” she said during her opening statement. “Or do I preserve our privacy and allow the Senate to make its decision without knowing the full truth of his past behaviors?”

2. Kavanaugh was aggressive, tearful and partisan in his own defense

Kavanaugh mounted a defiant and tearful defense that stood in stark contrast to the measured and passive interview he gave with his wife to Fox News, denying Blasey Ford’s accusations forcefully and hitting back at Senate Democrats. “My family and my name have been totally and permanently destroyed by vicious and false additional allegations,” he said. He seemed intent on rebutting each point that had been used to cast aspersions on his character. Over 45 minutes, he addressed how he spent his summer weekends as a teenager; how he received encouraging texts from his friends in the days preceding the hearing; and how he drank beer as a teen but never to the point of blacking out.

Before the Senate, his family and God, Kavanaugh said, “I am innocent of this charge.” Early in his prepared remarks, he went directly at the Democrats, accusing them of inciting a “frenzy” to “come up with something, anything, to block my nomination.” “Some of you were lying in wait and had it ready,” he said. He also proved to be a combative witness. Asked by Senator Amy Klobuchar if he had ever blacked out from drinking, he batted the question back: “Have you?”

3. The committee avoided an Anita Hill moment, but Republicans made their fury known

Eager to avoid the optics of an all-male Republican panel of senators grilling a sexual assault victim, Senate Republicans chose to employ Rachel Mitchell, a sex crimes prosecutor from Arizona, to question Blasey Ford. The result of the format proved jarring at times, as the hearing moved rapidly back and forth between Senate Democrats’ politically freighted questions and Mitchell’s meticulous, prosecutorial style. But the effect of Mitchell’s careful, granular questions was limited by her five-minute blocks of time, and Senate Republicans expressed frustration at the impediment, although they defended their choice to retain an outside questioner.

While Blasey Ford provided some small clarifications, she remained consistent in her testimony and appeared to gain confidence as the hearing went on. When it came to questioning Kavanaugh, however, Senate Republicans quickly took matters into their own hands – Senator Lindsey Graham of South Carolina exploded into a tirade directed at his Democratic colleagues. “Boy, you all want power,” he said. “God, I hope you never get it. I hope the American people can see through this sham that you knew about it and you held it. You had no intention of protecting Ford. None. She’s as much of a victim as you.”

That outburst changed the tenor of hearings, and one by one, Senate Republicans, dismissing Mitchell, used their five minutes to apologise to Kavanaugh and denounce their Democratic colleagues. “You’re the first major target of a new strategy that’s developed here, and I think you’re right,” Senator Thom Tillis told Kavanaugh. “I think it’s just basically attack, attack, attack.”

4. All eyes will stay on the undecided senators

Republicans on the committee, including Senator John Cornyn of Texas, the No 2 Republican in the chamber, said they expect the committee to vote on Kavanaugh’s confirmation Friday morning, as scheduled. But while Kavanaugh’s scorched-earth testimony was well received by his conservative backers, he must also persuade a moderate group of senators known to break from party lines.

One senator who could delay a committee vote is Senator Jeff Flake who fought to have the hearing in the first place. Flake, who is retiring at the end of the year, has offered few hints into his reactions to the testimony, and he declined to ask Kavanaugh any questions during the hearing. But he previously offered his own test to reporters: “If you believe” Blasey Ford, “you vote no.”