Paris Letter: Manuel Valls wants to be mayor of Catalan capital having been outdone by Macron 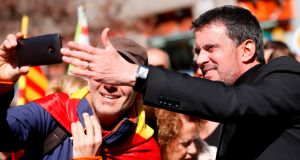 Manuel Valls during a demonstration to support the unity of Spain in Barcelona. Photograph: Pau Barrena/AFP/Getty Images

Manuel Valls was born 56 years ago in Barcelona, but his Swiss mother and Catalan father, a well-known painter, moved to Paris to escape Franco’s rule. He was naturalised a French citizen at the age of 20 and rose through the ranks of the socialist party to become François Hollande’s interior minister (2012-2014), then prime minister (2014-2016).

Now, in what may prove to be an unprecedented act of self-reinvention and political resurrection, Valls is set to announce his candidacy to become mayor of Barcelona at a “civic event” at the Centre of Contemporary Culture in Barcelona on Tuesday evening.

No head of a European government has pursued a political career in another EU country. The closest parallels are the 19th-century statesman Giuseppe Garibaldi, who was born in Nice and served in both the Italian and French parliaments, and Daniel Cohn-Bendit, who was elected four times an MEP, twice as a German and twice as a French man.

Valls says his interest in the Barcelona town hall is “an illustration of European citizenship”. Whether or not he wins, it may be a one-way trip. His prolonged absence has angered fellow deputies in the French National Assembly. And constituents in the Paris suburb of Evry, who Valls represented since 2002, feel abandoned.

While Valls spent more and more time in Barcelona this year, “nobody was in charge here”, a retired woman in Evry told Le Parisien newspaper. “The politicians all take us for fools. They ask us to vote for them, and then a year later they go away ... ”

When Valls visited then taoiseach Enda Kenny in Dublin in April 2015, many French people fervently hoped for a presidential contest between Valls and the conservative politician Alain Juppé. It never happened. Rarely has such a promising political career fizzled out so inauspiciously.

As interior minister, Valls had been the scourge of itinerant Roma. In the midst of jihadist attacks, his rhetoric was interpreted as Islamophobic. Things started going wrong for Valls when he took his sons on a government jet to a football match in Berlin. He was perceived as ill-tempered and over-ambitious.

In a humiliating blow, Valls was defeated in the socialist presidential primary in January 2017. He nearly lost the seat he had held for 15 years in subsequent legislative elections, scraping through by only 139 votes over his far-left challenger from the France Unbowed party.

Valls’s Catalan critics say he has come to Barcelona only because he was shoved aside by President Emmanuel Macron. Sources close to both politicians confirm the deep antipathy between them.

When Macron was economy minister under Valls, he blamed Valls for gutting his reforms of bus transport and Sunday trading, then depriving Macron of the satisfaction of a parliamentary vote by passing his law by decree.

It was a nightmare for Valls to see the young upstart with virtually no political experience snatch France’s highest political office from under his nose. To add insult to injury, Macron refused to allow Valls to stand for the National Assembly on the En Marche! ticket.

Both Macron and Valls are pro-European social democrats who have been accused of veering to the right. Like Macron, Valls says the left-right divide in politics is outdated. Valls’s campaign in Barcelona looks set to mimic Macron’s winning formula.

The centre-right Spanish party Ciudadanos (Citizens) supports Valls, but he may prefer to stand as an independent, in the hope of winning votes across as broad a spectrum as possible.

A year after the referendum on Catalan independence, most of the leaders of the separatist movement are in prison or in exile, like the former president of the region, Carles Puigdemont, who lives in Belgium. Pro-Spanish Catalans believe they have found an articulate spokesman in Valls.

Valls’s private life has followed the twists and turns of his political career. He had four children with his first wife, a school teacher. He and his second wife, a concert violinist, announced they were divorcing last April. Valls had a brief liaison with the spokeswoman for the En Marche! group in the National Assembly.

Then he was introduced to Susana Gallardo (53), the fabulously wealthy heiress to the Almirall pharmaceutical fortune and ex-wife of the owner of the Pronovias chain of wedding dress stores.

Gallardo owns a mansion in Menorca and an apartment in Barcelona, where Valls now lives. Like Valls, she is a passionate advocate of Spanish unity. Valls’s detractors back in Paris say Gallardo’s influence and contacts book may be the most attractive things about her.