Trump praises Kavanaugh as ‘honest’ after dramatic day of hearings

Woman, who has accused Kavanaugh of sexually assaulting her at 15, says she feared she would die 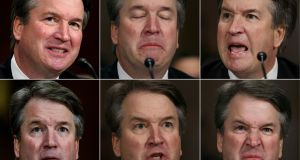 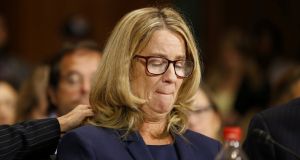 Christine Blasey Ford reacts as she speaks before the Senate Judiciary Committee hearing on the nomination of Brett Kavanaugh to be an associate justice of the Supreme Court of the United States, on Capitol Hill. Photograph: Michael Reynolds/Reuters/Pool 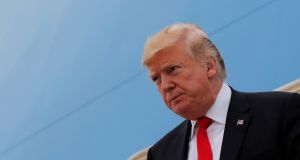 US president Donald Trump has praised US Supreme Court nominee Brett Kavaunagh as “honest” after a dramatic day of testimony in the US senate.

Despite powerful testimony from Christine Blasey Ford - the woman who has accused Mr Kavanaugh of sexually assaulting her when she was 15 - Republicans agreed to move forward on a confirmation vote on President Trump’s supreme court nominee.

Mr Trump weighed in on twitter on Friday after Mr Kavanaugh’s testimony, tweeting: “Judge Kavanaugh showed America exactly why I nominated him. His testimony was powerful, honest, and riveting. Democrats’ search and destroy strategy is disgraceful and this process has been a total sham and effort to delay, obstruct, and resist. The Senate must vote!”

The Senate Judiciary Committee will vote on the confirmation of Mr Kavanaugh as Supreme Court nominee on Friday.

The 21-member committee, which is controlled by Republicans, will vote on Mr Kavanaugh’s nomination at 9.30am on Friday. If the committee votes to endorse him, it will move to a full vote in the Senate as early as Saturday.

But major questions remain about how a handful of key Republicans will vote.

In particular, Jeff Flake, a Republican member of the senate judiciary committee, has not indicated if he will endorse Mr Kavanaugh.

Senator Susan Collins from Maine and Senator Lisa Murkowski from Alaska could also be potential swing votes if the confirmation goes to the full senate.

With Republicans commanding only a slim majority, it is imperative for the Republican leadership that all senate Republicans vote for Mr Kavanaugh.

Christine Blasey Ford, the woman who has accused the federal judge of sexually assaulting her when she was 15, was questioned for more than three hours by the senate judiciary committee on Thursday. In an emotional, but fiercely authoritative testimony, she described in detail an attack she alleges took place at a party.

“It was hard for me to breathe and I believed that Brett was going to accidentally kill me,” she told the committee.

Asked if her accusations could have been a case of “mistaken identity.” “Absolutely not,” she replied.

Her most powerful memory from the incident she said was “the uproarious laughter” between Mr Kavanaugh and his friend Mark Judge who she says witnessed the attack.

But her accused, Mr Kavanaugh, vehemently defended his reputation and refuted the allegations in his afternoon testimony to the committee. “My family and my name have been totally and permanently destroyed,” he said, describing the confirmation process as a “national disgrace.”

Delivering his opening statement in angry tones, he denounced the “circus” of the past two weeks as a “calculated and orchestrated political hit, fuelled by pent up anger at President Trump and the 2016 election.”

Though he broke down at various points, he remained defiant. “You might defeat me in the final vote, but you will never get me to quit.”

The highly-anticipated hearing could have profound implications for President Trump’s political agenda and quest to appoint a second Supreme Court justice. If confirmed, Mr Kavanaugh is likely to tilt the political hue of the Supreme Court to the right, possibly for decades. Republicans are also wary of delaying the process past the mid-term elections, amid concerns that Democrats could win control of the Senate and block any Trump nomination.

Despite speculation that the White House was lining up judge Amy Coney Barrett as a possible replacement candidate, President Trump backed Mr Kavanaugh on Friday.

But with Republicans only holding a slim majority in the Senate, Mr Kavanaugh’s future may ultimately lie in the hands of three Republican senators who have not yet given him their endorsement - Jeff Flake, Susan Collins and Lisa Murkowski.

In an indication of the stakes at play, Senator Lindsey Graham urged his Republican colleagues to endorse Kavanaugh.

“If you vote no, you are legitimising the most despicable thing I’ve even seen in politics.”