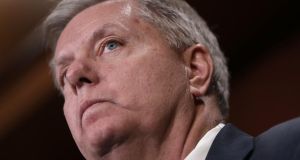 Lindsey Graham, a three-term senator from South Carolina, cited the increasing violence in the Middle East as motivation for his decision to run. Photograph: Win McNamee/Getty Images

Mr Graham, a three-term senior senator from South Carolina, told CBS that he would make an official announcement about his candidacy in his home town of Central, South Carolina on June 1st, though he all but confirmed that he was a candidate, pointing to the increasing violence in the Middle East as motivation.

He referred to the loss of the Iraqi city of Ramadi as reason why the US must become more involved in the region.

“It’s not the fault of others, or their lack of this or that that makes me want to run. It’s my ability in my own mind to be a good commander-in-chief and to make Washington work.”

A fierce critic of President Barack Obama’s foreign policy, particularly in the Middle East, Mr Graham aligns himself with fellow hawk and friend, senator John McCain, himself a former Republican presidential nominee, on many issues at odds with the White House.

While Mr Graham’s interventionism will win him support among Republican primary voters who pick the party’s candidate, his track record of compromise with Democrats in the Senate may alienate conservatives who play an influential role in early nominating polls.

He was one of the so-called “Gang of Eight” Democrat and Republican senators who proposed a since-stalled comprehensive immigration Bill that would put more than 11 million illegal immigrants on a path to citizenship. He supported the appointment of Obama nominee Sonia Sotomayor to the supreme court in 2009.

Mr Graham is the seventh major Republican candidate to join a crowded race. He trails most candidates with support of just 1.3 per cent, according to political tracking website Real Clear Politics, but has an advantage of being the only Republican candidate from one of the four early nominating states, which could prolong his run.

Undeclared candidates include former Florida governor Jeb Bush, former New York governor George Pataki and Wisconsin governor Scott Walker, who has said he would decide on his candidacy in June.

The potentially large number of candidates has created a headache for the party as it tries to winnow the field without irreparably harming its ultimate nominee for an expected run-off with strong Democratic frontrunner Hillary Clinton.

The party must also deal with practical matters like accommodating more than a dozen candidates on a stage in the first of the party’s televised debates, in Cleveland in August.