Ferguson: Father appeals for calm ahead of Brown funeral 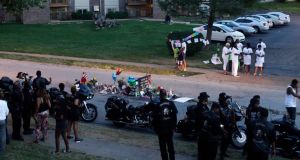 The father of a black teenager who was shot dead by a white police officer in Ferguson, Missouri earlier this month has appealed for calm ahead of his funeral.

The sometimes violent protests have spawned headlines around the world and have focused attention on racial issues in the United States. Local police have been criticised for mass arrests and the use of heavy-handed tactics and military gear.

“All I want tomorrow is peace while we lay our son to rest,” Michael Brown Sr said at a rally against police violence that he led yesterday with civil rights leader Reverend Al Sharpton.

“Please, that’s all I ask,” he told the crowd of hundreds, including the parents of Trayvon Martin, the Florida teenager shot dead by a neighbourhood watch volunteer in 2012.

Rev Sharpton, who will also attend the funeral, said: “We don’t want anything tomorrow that will defile Michael Brown’s name.”

Authorities remained braced for a possible flare-up around the funeral, although clashes between protesters and police had significantly decreased by midweek and the National Guard began a gradual withdrawal from the St Louis suburb on Friday.

The White House said it was sending three presidential aides to the service at a St Louis Baptist church and a large turnout was expected both inside and outside.

“Ferguson is a part of a bigger national urban cancer. This crisis is a metaphor for the urban American crisis,” he said.

Yesterday evening, only a handful of people gathered at the site of the recent protests, greatly outnumbered by a visible but unobtrusive police presence.

Speaking on CBS’ Face the Nation, Democratic Representative Lacy Clay of Missouri, who is expected to speak at the funeral, said he had promised Mr Brown’s parents he would push for a transparent investigation into his death.

“I’m more concerned that if we do not get to the truth and get to what actually happened and bring justice to this situation, then there’s going to be a problem in the streets,” he said.

A grand jury began hearing evidence on Wednesday, a process the county prosecutor said could take until mid-October.

“The real question is how quickly the killer has to pay the price,” Rev Jackson said last night.