Eyewitness footage has captured gunfire erupting at a protest in Kenosha, Wisconsin - where three people were shot, one of them fatally. Video: Brendan Gutenschwagerdan/Reuters 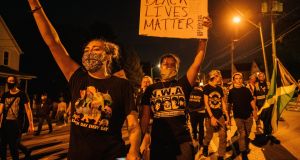 The FBI has opened a civil rights investigation into the police shooting of a black man in the Wisconsin city of Kenosha, as a suspect remained in custody over the killing of two men in a separate incident in the city this week.

Jacob Blake, a 29-year-old father, was left paralysed when a police officer shot him several times in the back on Sunday.

The event has sparked nightly violence and unrest in Kenosha, culminating with a clash between armed civilians and Black Lives Matter protesters on Tuesday that left two men shot dead and one seriously injured. Kyle Rittenhouse, a 17-year-old white male, was arrested in connection with the killings, and authorities are investigating if he is associated with a vigilante group.

The new focus on racial injustice and law enforcement comes as tens of thousands of people are expected to gather in Washington DC on Friday for a March on Washington, which was scheduled following the death of African-American man George Floyd in May.

The civil rights activist Rev Al Sharpton is among those who will address the event at the Lincoln Memorial, on the anniversary of the famous March on Washington for Jobs and Freedom led by Martin Luther King in 1963 when he delivered his I Have a Dream speech.

Several prominent basketball teams postponed games that were due to be played as part of National Basketball Association season, as a protest against the shooting of Mr Blake.

Former president Barack Obama praised the NBA players in a tweet. “I commend the players...for standing up for what they believe in...It’s going to take all our institutions to stand up for our values.”

It was expected that the postponed games will ultimately be played following negotiations between players and the association.

Protests at the shooting of Mr Blake stretched into a fourth night in Kenosha on Wednesday, though the streets were more peaceful than the previous night when the two men were killed by a gunman.

US president Donald Trump has sent federal troops to the city with the consent of the Democratic governor of Wisconsin, Tony Evers, as protesters continue to defy an evening curfew.

Events in Kenosha – which have sparked protests in other cities – threaten to push the issue of racial injustice and policing to the top of the political agenda, less than three months before the US presidential election.

Vice-president Mike Pence promised to maintain “law and order” on the streets of the United States if Mr Trump is re-elected in November as he accepted the vice-presidential nomination on the third night of the Republican National Convention.

Fox News host Tucker Carlson was widely criticised for stating on his television show that Kyle Rittenhouse, the youth arrested in the wake of the shootings on Tuesday, was maintaining order. “How shocked are we that 17-year-olds with rifles decided they had to maintain order when no one else would?” he said.

Investigators are examining social media posts and video footage that suggest the arrested youth is connected to a far-right movement. Early indications are that he was a fierce supporter of Mr Trump, gun rights and of police officers.

Meanwhile, police in Wisconsin revealed more details about the events last Sunday which have sparked the latest wave of unrest.

The officer who shot Mr Blake in the back was named as Rusten Sheskey, who has been working for the Kenosha police department for seven years. Police said that a knife was found on the driver’s side of the car, which Mr Blake was trying to enter when he was shot in the back seven times. They also confirmed that a Taser had been used, but said it was “not successful in stopping Mr Blake”.