Ethiopia’s ethnic violence displaces up to 400,000 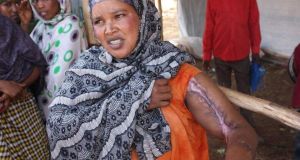 At a camp for displaced Somalis in Kolenchi, this formerly prosperous business woman from Aweday was burnt during the riot and lost everything. Photograph: James Jeffrey

Night had fallen over the Ethiopian village of Melkabulo when local Oromo men went to the houses of ethnic Somali to tell them they must cross the river before dawn or they would be killed.

“Before we were friends, but they said: ‘You are Somalis, you can’t stay in our homeland’,” says one of the Somali men who fled the East Harerghe zone of the Oromia region. “The river was in flood as we crossed and took our clothes and possessions – we lost everything.”

At the same time that Somalis had to leave Ethiopia’s Oromia region, Oromo were being evicted from the neighbouring Somali region as tit-for-tat violence and evictions tore apart communities that had lived peacefully integrated, often for centuries, and in which intermarriage between Oromo and Somali was the norm.

“I was making my husband dinner in the evening but an hour after he returned from work he kicked me out of our home,” says Zahala Shekabde, a Somali married to an Oromo. “I pleaded with him, told him I loved him and that I have nothing else, but he said he didn’t want to listen and I must go otherwise he would hurt me.”

Estimates for the number of people displaced since ethnic clashes broke out in early September vary between 200,000 and 400,000 – one of Ethiopia’s largest internal displacements from violence in recent times.

In new camps accommodating the displaced, both Oromo and Somali tell equally convincing stories of ethnic violence, primarily carried out, they claim, by each region’s special police, while exhibiting even more convincing physical evidence of that violence.

On top of the physical injuries, there is the mental anguish and uncertainty.

“My husband left for work in the morning but after the Somali regional police arrived we had to leave before he came back,” says Birtukan Jailan in an industrial park warehouse sheltering evicted Oromo on the outskirts of the city of Harar. She still has no idea where her husband is.

Nearby, a woman lies on the ground under a blanket, catatonic with grief. She lost four children during the evictions from the Somali region and has no idea of their whereabouts.

Beyond the huge numbers involved and violence resulting in unconfirmed deaths, it’s hard to establish what exactly happened and why: most international organisations in Ethiopia are reluctant to talk with media for fear of upsetting the federal government, while the regional governments and various interest groups trade accusations, denials and counter accusations about leveraging unrest to divide and rule and settle political vendettas.

Events were preceded by tensions rising after the reported killing of two Oromo officials by Somali police around the regional border.

On September 12th, Oromo protests in Aweday, between Harar and Dire Dawa, led to rioting that left up to 40 dead, the majority Somali traders of khat, a mildly narcotic leaf widely chewed.

Following Aweday, the Somali regional government began evicting Oromo from the region. Officials say this was for the Oromo’s own safety, and that not one Oromo died from ethnic violence in the region – a fact disputed by displaced Oromo.

“Someone told me police were coming with knives to cut our throats so we left,” says Hussein Mohammed (28), an Oromo sheltering in a Dire Dawa camp with his wife and three children. “They killed 50 people – I saw the bodies afterwards in the village.”

Oromia and Somali are the two largest regions in Ethiopia by area size, sharing a border of more than 1,400km. At 35 million, the Oromo constitute the largest proportion of Ethiopia’s population; Somalis make up 6.5 million.

Ethnic conflict along the border between the two regions and in their rural hinterlands has long occurred. But such violence in urban areas well-removed from the contentious border has been rare up to now.

In 2004, a referendum to decide the fate of more than 420 kebeles – Ethiopia’s smallest administrative unit – around the border gave 80 per cent of them to Oromia.

The referendum result remains contentious, which some say could be one factor behind the current conflict, as may be an on-going drought.

“As you move west of the regional border the land becomes higher with more water and pasture,” says the head of a humanitarian organisation in Ethiopia, who spoke on condition of anonymity. “Where the border runs is very contentious – you’ll find maps giving different outlines in each region.”

The next step for Oromo and Somali displaced from homes is to find a long-term solution. Observers say they could be integrated in the communities where they are now, resettled elsewhere or returned to their original communities – each a tall order while the two regional governments remain at loggerheads.

“The [national] government has committed to everyone being able to return home, as is their constitutional right,” said the member of an international organisation dealing with displacement, who spoke on condition of anonymity. “But it’s impossible to say how long it could take.”

Meanwhile, many displaced say they are not willing to return home as it wouldn’t be safe. “If the federal government sends forces to keep the peace they stay for a week or a month and then after they leave it happens again,” said one Somali man. “We can’t risk staying.”

Ethiopia’s ethnic federalist system devolves power to regional states, which, some observers note, leaves the government in a quandary of respecting that devolution while also protecting the constitutional rights of Ethiopians, especially minorities.

Currently, as Ethiopia’s regional governments further flex their devolved muscles, maintaining Ethiopia as a stable state appears an increasing challenge for a government that has been successful in holding together the country’s heterogeneous parts since the 1991 revolution that brought it to power.

“The problem is the government isn’t offering any solutions to underlying problems and complaints of the country,” says one foreign business owner living in Ethiopia for decades and married to an ethnic Somali. “It can’t continue this way.”

1 All students will not return to school even if social distancing rules are relaxed – McHugh
2 Miriam Lord: Taoiseach is trapped in a Zoom session from hell
3 Dangerous student stalker sentenced to seven years in jail
4 The human cost of Covid-19: Ireland's care homes with the most deaths revealed
5 Maria Bailey takes action against newspaper over ‘swing gate’ coverage
Real news has value SUBSCRIBE