Spain warns of ‘attack’ on borders as migrant numbers soar 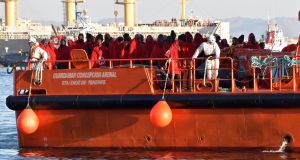 A sharp increase in the number of migrants arriving from Africa is stretching the resources of local authorities in Spain and has prompted the government to warn that the country is under “attack”.

On Friday and Saturday alone, more than 500 migrants travelling on small boats were picked up by emergency vessels and civil guard patrols in Spanish waters off the southern provinces of Murcia and Almería.

Nearly 18,000 migrants reached Spain by sea between the beginning of this year and mid-November, according to the UN’s International Organisation for Migration, a three-fold increase on the same period last year. A total of 158 migrants died while making the crossing, the agency reported.

Numbers of arrivals to Greece and Italy are still the highest in Europe, but have dipped this year as migrants increasingly use Spain as a port of entry to the European Union, having departed from North Africa.

After the weekend arrivals on the south coast, the government’s representative in the region, Francisco Bernabé, warned of “a co-ordinated attack on our borders and, therefore, on the borders of the European Union”.

Right-wing Spanish commentator Hermann Tertsch described the recent wave of migrants reaching his country’s shores as “an invasion by small vessels, which is obviously organised and synchronised”. The Spanish coast, he went on, “could soon become a horrific place, like those Italian ports we have seen over the last year”.

“It doesn’t help the situation of those seeking refuge, nor does it create a favourable climate for those who are fleeing, it just distances us from dialogue and harmony,” she said.

As well as the increase in numbers, in recent months there has been another change in migration to Spain: the nationality of those travelling. Previously, sub-Saharan Africans from countries such as Nigeria, Senegal, Sierra Leone and Ivory Coast had been the main arrivals, but Spanish government figures show that Moroccans and Algerians are now the predominant nationalities.

“It’s an extraordinary situation which requires extraordinary measures,” Samuel Linares, co-ordinator of the Red Cross in the province of Málaga, told The Irish Times. “All the indicators suggest that this phenomenon is increasing – the flow of migrants using this route is intensifying.”

Mr Linares said that local charities in Málaga have adapted sports centres in the city to house migrants when numbers have suddenly spiked. This week, the Spanish government has housed several hundred recent arrivals – all of them Algerian – in a new building in Málaga province which was designed as a prison, as they wait for the authorities to process their legal status.

Interior minister Juan Ignacio Zoido defended the move, saying that the recent arrivals “have collapsed the system”. However, a prison officers’ union denounced it as “a serious breach of European norms”.

Charities say the reasons for the increase in numbers are difficult to pin down. However, a clampdown by authorities on the Libya-Italy route in the eastern Mediterranean appears to have pushed many migrants west in search of an alternative.

Domestic issues in countries of origin also play a part. Many of the Moroccans who have been coming this year appear to have been fleeing police repression in their country’s restive Rif region. In addition, thousands of Moroccan police deployed to that area have left other points of departure unguarded, allowing migrants of different nationalities to attempt the crossing to Spain.

Algeria, meanwhile, has been struggling with a drop in the price of oil in recent years, which has had social repercussions for the energy-reliant nation.

On Monday, Zoido had a meeting with the Algerian ambassador in Madrid, Taous Feroukhi, at which he thanked her country for preventing more migrant vessels from departing for Spain.