Banned in the UK as a harmful drug, here it is a welcome distraction from a life of hardship 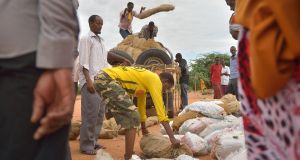 After a year in Ethiopia I couldn’t help noticing how many residents in the capital, Addis Ababa, liked to spend a weekend afternoon incongruously chewing green leaves.

Khat – also spelt or known as qat, chat, cat, jima, mira – is to some a harmless stimulant, to others a harmful drug: it was banned in the UK in 2014.

The more I learned about this enigmatic plant – once thought imbued with divine properties in ancient Egypt and the Middle East – the more khat drew me into its sphere. Eventually, for the sake of journalistic duty, I thought I had better chew some.

Once chewed never forgotten: now during travels around the Horn of Africa, khat often intrudes on my mind and is regularly within sight, like a constant tempting companion.

Much of Ethiopia’s prime khat grows in the hills around the prominent eastern Ethiopian cities of Dire Dawa and Harar, about 400km east of Addis Ababa toward the border with Somaliland.

The morning after market trading late into the night, trucks loaded with khat hurtle eastward along rough roads through the Ethiopian lowlands to make deliveries in neighbouring Djibouti and Somaliland.

Meanwhile, aircraft with identical cargo are threading through azure skies to locations all around the world.

Khat is an institution in the Horn of Africa, and I can’t say I blame those who use it . For despite undoubted development in the likes of Ethiopia, life for many of the Horn’s residents remains exceptionally hard.

Multitudes have nothing to do beyond dull jobs and household chores, and can’t afford to do much else. There are stratospheric levels of unemployment.

On top of all this, people must endure further obstacles to improvement in their lives: total inertia in government and administrative departments, corruption and nepotism everywhere favouring the undeserving few, and Orwellian bureaucracy at every turn to block endeavours.

Foreigners living in countries like Ethiopia and pummelled by such frustrations have a release valve: they can fly out of the country for a break.

The vast majority of people here can’t dream of such an exit strategy. Instead, they take what distraction is available.

For many that’s a pleasant afternoon chewing khat with friends, especially in Muslim countries such as Somaliland and Djibouti where popping to the local boozer isn’t an option.

It’s estimated 90 per cent of Somaliland’s adult male population – and about 20 per cent of women – chew khat for mirqaan, the Somali word for the buzz it can give. “You can understand things better when you chew,” says Mustafa, a journalist in the Somaliland capital, Hargeisa.

Nowadays khat is so enmeshed with Somaliland culture and daily life it’s an important tax earner for Somaliland’s government. It also generates thousands of jobs.

This all helps shore up a fragile economy while Somaliland’s claim to independence remains unrecognised, leaving it marooned from international financial institutions and assistance.

For Ethiopia, khat is a major earner of sorely needed foreign currency, especially as inflation pummels the Ethiopian birr, garnering millions of euro from Somaliland and Djibouti alone.

But for me it’s not the economic statistics that excite, rather the way khat offers a way to meet locals more intimately and go beyond the surface level that a typical tourist might only scratch at.

One Easter Sunday afternoon I found myself in a nice Addis Ababa suburb, reclining in an elegant traditional Arabic-styled mafraj room with a band of smartly attired Yemeni émigré gentlemen – I was the youngest by a couple of decades – who spent the afternoon chewing khat and discussing politics, history, life and its mysteries.

Even in the dingiest khat house you always take off your shoes before entering a room, and then greet everyone, shaking hands as they put down shisha pipes that are a popular addition when chewing in Addis Ababa.

Amid the mess of discarded leaves and peanut husks littering the floor, decorum reigns.

At the same time, I’ve met enough khat addicts, wide-eyed and spitting green mush, to appreciate how, like alcohol or any psychoactive drug, including coffee, khat creates problems when overindulged.

“You end up wasting money and time, while it negatively affects your health and family relationships,” says Saleed Mohammed working with a UK-based NGO working in Hargeisa. “If used sensibly, then it can be okay.”

Before the UK ban, the former London Institute for the Study of Drug Dependence (now DrugWise) issued a factsheet stating: “In cultures where its use is indigenous, khat has traditionally been used socially, much like coffee in western culture.”

Khat undercuts preconceived ideas, challenging our conceptions of what a drug is, of what addiction is, of what an addicted society looks like. Some say the West could learn a thing or two by the Horn of Africa’s ability to embrace a drug without recourse to laws, enforcement and meddling.

“If the government tried to ban khat here you’d have a revolution,” a man told me in Hargeisa. I couldn’t tell if he said this tongue-in-cheek because of the huge wad of khat already there.