Lu Wei is first ‘tiger’ to be taken down since Communist Party congress, says watchdog 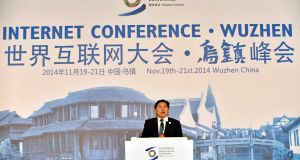 China’s anti-graft watchdog, the Central Commission for Discipline Inspection, said in a statement on its website that Mr Lu, who worked as head of the Cyberspace Administration in 2013, was being investigated for “suspected severe disciplinary violations”.

“The first tiger after the 19th congress!” the commission said, referring to last month’s Communist Party congress that cemented President Xi Jinping’s grip on power. “Tigers” and “flies” are terms used to refer, respectively, to elite and lowly-ranked officials s of the Communist Party.

The investigation showed “determination of applying strict party discipline under Xi Jinping the core party leader”, the commission said, and was “a strong signal the anti-corruption drive will not relent”.

The cyberspace administration did not carry out Mr Xi’s instructions in a timely or resolute manner, the commission added, and “the safeguarding of political security was not strong enough.”

Mr Lu headed Beijing’s propaganda department before he joined the internet regulator. In 2014 he became a deputy minister in the national propaganda ministry.

China has tightened up controls of the internet through the system of censorship known as the Great Firewall, and thousands are employed to monitor content.

This is ostensibly to rule out pornography and violent content, but also to keep a lid on dissenting views online. Mr Lu’s appointment was seen as a symbol of China’s increased internet monitoring.

“Indeed, we do not welcome those that make money off China, occupy China’s market, even as they slander China’s people. These kinds of websites I definitely will not allow in my house,” he said in 2015.

A milestone event in his career was the first World Internet Conference in Wuzhen in 2014, which outlined China’s vision of a strictly controlled online environment.

In that year, Mr Lu visited Facebook’s campus in the US, and was greeted by the social networking site founder, Mark Zuckerberg, speaking Chinese.

Over the past five years, Mr Xi’s anti-corruption campaign has punished some 1.34 million Communist Party officials, both “tigers” at senior level and more junior “flies”. Among the biggest names brought down are Bo Xilai, once seen as a potential leadership candidate, and former top security official Zhou Yongkang.

The anti-corruption campaign is a popular measure among Chinese people.

Mr Lu’s downfall is unlikely to signal a softer approach to internet censorship in China. The online phone call and messaging service Skype is no longer available to download in app stores.

Other foreign internet services such as Facebook, Twitter, Gmail, Snapchat and Telegram are all banned in China. – Additional reporting: agencies