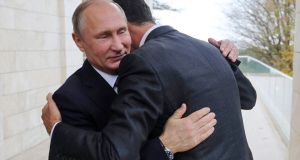 During the encounter, Assad thanked Russia for its support in defeating insurgents, urged Moscow to ensure Syrians will lead UN-moderated talks and vowed to engage with opposition members who “are really interested in a political settlement”.

This meeting coincided with the resignation of hardliners in the Saudi-sponsored High Negotiations Committee (HNC), including chairman Riad Hijab, a former Syrian prime minister who defected after the uprising.

The resignations could end divisions within the HNC over Assad’s fate. Hardliners demand his removal before the formation of a transitional authority to draft a new constitution and hold elections. Moderates argue this is no longer realistic due to Syrian military victories in battles against HNC paramilitary allies.

The opposing sides are set hold separate meetings on Wednesday to prepare for the November 28th resumption of the Geneva talks. Putin will confer with Iranian and Turkish presidents Hassan Rouhani and Recep Tayyip Erdogan at the Black Sea resort of Sochi. The HNC and other opposition factions will meet in the Saudi capital, Riyadh, with the aim of forming a single opposition delegation.

Russia and Iran have provided air and ground support to the Syrian army in the 6½-year war against rebels and jihadis. Turkey has adopted a contradictory policy of backing anti-Assad insurgents while joining the effort to end the war. Following pre-summit consultations among foreign ministers and army chiefs, Russian foreign minister Sergei Lavrov declared the three powers had “reached agreement on the key issues”, without elaborating.

Moscow and Tehran insist Assad must remain in office until the country is stabilised. Turkey has pressed publicly for his removal but sotto voce admitted he has to remain. Following a meeting between Putin and Erdogan on November 13th, Putin said they were “united on the need to ensure [Syria’s] long-term stabisation [and] to advance the process of a political settlement”.

The focus of the Sochi meeting is on reducing violence and increasing the flow of humanitarian aid to trapped and impoverished Syrian communities. In the run-up to the Geneva talks, clashes and shelling have risen between the army and jihadis based east of Damascus, an area where a ceasefire had been observed since July.

As the violence was initiated by insurgent factions, including the Saudi-backed Jaish al-Islam, the objective seems to be to assert the armed groups’ relevance following the defeat of Islamic State.

Resignations of HNC hardliners, presumably under Saudi pressure, could not only enable the HNC to join with the moderate Cairo and Moscow platforms, but also ensure the opposition adopts a common policy before returning to Geneva. Both UN mediator Staffan de Mistura and Damascus have called for the creation of a unified opposition delegation.

The Riyadh meeting, set to last three days, could determine the fate of the coming round of intra-Syrian negotiations at Geneva. Resignations by hardliners seem to show that Saudi Arabia’s ambitious and impulsive crown prince Mohammed bin Salman, who runs foreign policy, has decided to adopt the line of the moderates. If this is the case, the Geneva talks could achieve a breakthrough on the basis of advances made in earlier sessions.

If there is no progress in Geneva the Russians, Iranians and Turks could take over, marginalising Riyadh and its western allies.

The three powers – all with boots on the ground in Syria – have been preparing for this scenario by making plans to expand talks held in Astana, Kazakhstan, that have so far focused on military matters.

Moscow, Tehran and Ankara have proposed a Syrian national dialogue congress to, according to the Russian foreign ministry, launch inclusive intra-Syrian talks to discuss “all issues on the national agenda” and reach “compromise solutions” mandated by UN Security Council resolution 2254.