Paris Letter: Yellow vest riots are too close to home for city-dwelling elites

Protesters from neglected countryside knocking on the door of bourgeois Parisians

December 11th, 2018: Shuttered shops, burning cars and tear gas. The New York Times were on the ground in Paris with the “Yellow Vests” protesters as they took to the streets for the fourth week in a row. Video: NYT 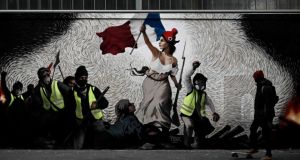 “Death to the bourgeois state,” says graffiti left by gilets jaunes rioters next to a friend’s front door. My apartment looks on to the government ministry that was invaded by insurgents driving a hijacked forklift truck on January 5th.

The protest movement turned insurrection has come too close for comfort.

I returned from a year-end holiday to find my neighbourhood in central Paris transformed. “The Future”, says graffiti on a shop in the boulevard St Germain, next to the circular A symbol of anarchy.

The windows of my local Société Générale bank are shattered.

The Banque Nationale de Paris protected its windows with plywood, on which the rioters listed the bank’s supposed sins, including “climaticide” and fomenting war in Sudan.

Bourgeois means, literally, town-dweller. Most of the gilets jaunes are from the neglected countryside

Broken glass carpeted the street outside the cafe where I ate my first 2019 meal in Paris. I walked home past a scorched motorcycle, lying like a dead insect in front of Yves Saint Laurent headquarters.

My Spanish concierge was traumatised by watching rubbish bins burning on the corner.

My newspaper vendor said the yellow vests went on the rampage in our neighbourhood because they were pushed this direction by security forces.

Most days, I go outside to find dozens of police vans lined up in surrounding streets. It’s like living in an armed camp.

When the protests started in November, shops and banks would put plywood sheets over their windows late on Friday, then remove them on Sunday.

Now they leave the protective siding in place, giving central Paris the allure of a shanty town.

On December 29th, turnout for the protests dwindled to 12,000 nationwide. Many heaved a sigh of relief in the mistaken belief that the gilets jaunes (yellow vest) movement had been defused by president Emmanuel Macron’s promise of €10 billion to increase purchasing power.

But on January 5th, 50,000 gilets jaunes came back with a vengeance. The demonstrations have morphed from a protest at (now cancelled) fuel taxes to a seditious movement that is determined to bring down the government.

Prime minister Edouard Philippe announced on Monday night that he will deploy 80,000 police and gendarmes for “Act 9” on January 12th.

But will hardcore anarchists and vandals really be deterred by legislation that would create a register for violent demonstrators, similar to the one for football hooligans?

One of the most shocking images from the January 5th riots showed Christophe Dettinger (37), a former boxing champion, kicking a policeman on the ground on the Solferino footbridge over the Seine, and pummelling another policeman in the face.

Dettinger had “liked” a photograph of Marion Maréchal, the rising star of the French far right, on his Facebook page. He risks five years in prison and a €75,000 fine.

His supporters raised €117,000 for his defence by Tuesday morning, before the crowdfunding  platform Leetchi closed the fund down. A similar fund, set up for the 1,050 police who have been wounded in riots, raised far less.

In the old Guignols de l’info television show, the puppet version of former Trotskyist leader Arlette Laguiller promised in a soft voice to “string the bourgeois up by their entrails”.

At three Christmas dinners I attended in Paris, I detected a frisson of fear in the French bourgeoisie, a premonition that we’d all be strung up.

Virtually everyone I know likes Macron and detests the gilets jaunes. I could not understand why polls showed such high support for the protesters, until a colleague reminded me that in Paris, Macron won 90 per cent of the vote in the 2017 presidential election.

Bourgeois means, literally, town-dweller. Most of the gilets jaunes are from the neglected countryside.

Not by chance, they are attacking Paris, seat of the hated government, home to the ruling elite.

On Monday, Luigi Di Maio, the leader of the populist Italian Five Star movement, urged the gilets jaunes, “Don’t let up!” His partner in government, Matteo Salvini, the head of the extreme right-wing League, expressed his support for “honest citizens who are protesting against a president ruling against his own people”.

Marine Le Pen, the leader of the far-right Rassemblement National (RN), formerly Front National, and an ally of Salvini, is the Chesire cat of the gilets jaunes movement. She is almost invisible, except for her smile.

The demands made by RN in a statement this week are virtually identical to those of the gilets jaunes: the dissolution of the National Assembly and new elections based on proportional representation, which would probably hand the RN a third of the seats in the French legislature.