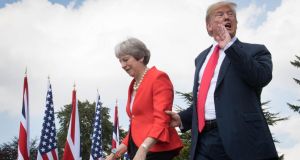 As British chancellor Phillip Hammond put a brave face on Brexit during talks with senior political and business figures this week at Davos, across the Atlantic, other diplomatic overtures were under way in Washington.

Foreign secretary Jeremy Hunt arrived in the US capital this week for meetings. Much of the visit was devoted to foreign policy.

He met with secretary of state Mike Pompeo at the state department, where the two allies discussed strategy in Yemen, Syria and the escalating crisis in Venezuela.

Britain’s relationship with the United States is not to be underestimated. The country has a formidable presence in Washington – its sprawling embassy looms large on Massachusetts Avenue just next to the Naval Observatory, the residence of the US vice-president.

Hundreds of diplomats and military personnel are based there, navigating relations between the two countries.

It is a relationship that has transformed dramatically since the tumultuous days of the American Revolution, becoming the “special relationship” cultivated by Winston Churchill during the second World War.

Like the other members of the so-called Five Eyes group that share intelligence with the United States – Australia, Canada and New Zealand – the UK has a relationship with the US heavily rooted in close military co-operation.

In this area, of course, Ireland cannot compete, though the arrangement that allows US troops to use Shannon airport is an important cog in the wheel of US-Irish relations.

While Ireland may not have the military might of others, it does compete for the American ear in other ways.

In his memoir of his time as Britain’s ambassador to the United States during the Clinton and Bush White House, Christopher Meyer writes at length about the power of the Irish-American lobby.

The annual St Patrick’s Day lunch in Congress and the White House shamrock ceremony was “the envy of the Greeks, Italians, Scots, Spaniards, Armenians, Chinese, Portuguese”, he writes, “all of whom could claim to have made a comparable contribution to American life and history”.

Meyer, who arrived in Washington during the Northern Ireland peace negotiations, noted the difficulty for Britain in getting a hearing from Capitol Hill, where a powerful Irish-American lobby, under the wing of the late Ted Kennedy, reigned. “For years the British embassy in Washington had had appalling relations with the Irish lobby. Mutual hostility ruled. It was very difficult to have Britain’s case heard.”

Explaining how his predecessor had moved to improve relations and engage on St Patrick’s Day, he described how the Irish and British governments and their representatives in Washington ultimately worked constructively with the Clinton administration on the peace process, even as he reflected that Gerry Adams and Martin McGuinness “moved through Washington as smoothly as sharks in warm water”.

Twenty years on, Britain and Ireland continue to work closely on certain matters, particularly under the umbrella of EU membership.

A case in point is the recent diplomatic effort to persuade the US treasury to reconsider sanctions on Rusal, the parent company of Aughinish Alumina in Limerick, which was driven by the Irish, British and other EU ambassadors.

But the spectre of Brexit raises new challenges for the relationship – and, more importantly, Britain’s relationship with the United States.

President Donald Trump is of course a committed Anglophile and a Brexit supporter. But his comments on a potential UK-US trade deal post-Brexit have been more equivocal.

In November, he said that the withdrawal agreement negotiated by Theresa May with the EU meant the UK may not be able to trade with the US after it leaves the EU – remarks that alarmed Brexiteers.

The promise of a bilateral trade agreement between Britain and the US is a central plank of Britain’s post-Brexit economic policy, given that British exports to the US are worth about £100 billion (€115.5 billion) to the British economy.

Britain may have another issue on its hands when it comes to Brexit. Many members of Congress are watching events in London closely, and several have indicated that a return to a hard border in Ireland must be avoided at all costs.

Richard Neal, the Massachusetts congressman, has been appointed chair of the powerful Ways and Means Committee. Another Irish-American, Brendan Boyle, has joined the committee.

The committee will play a central role in overseeing any future trade agreement between Washington and London.

Once again, Britain may find that the future of the “special relationship” may have to contend with an informed Irish-American lobby on Capitol Hill when it comes to forging a new trade deal.