Parkland: A year after the school massacre, gun control is still lax

America Letter: Shooting's anniversary reminds that gun crime is a tragic US fact of life 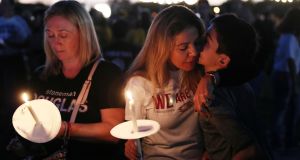 Lynda Miller, Soona Buchanan and her son, Shadi, attend a service for the victims of the mass shooting at Marjory Stoneman Douglas High School of February 14th, 2018. Photograph: Joe Raedle/Getty

As most of America indulged in the annual dose of sentimentalism to mark St Valentine’s Day this week, for others February 14th will forever have another meaning.

On that date a year ago, dozens of students and staff members at Marjory Stoneman Douglas High School in Parkland, Florida, were gunned down shortly after 2pm.

A former student entered the building carrying a semi-automatic AR15 rifle and began shooting. By the time he had fled, 17 people were dead and more than a dozen injured.

Last year, a 10 year old on her way to buy ice-cream was shot dead

This week many of the Parkland survivors and the families of those affected have been speaking out – reflecting not just on the trauma of that sunny day last February, but on the challenges they still face in trying to change America’s gun laws. Because one year on, it seems little has changed.

Here in the United States, gun crime is a fact of life rather than an anomaly, a reality that is accommodated rather than ever truly challenged.

Take Washington DC, the nation’s capital. On a Saturday three weeks ago, seven people were shot on a single day in the city. Four of these are being investigated as murders, including a triple homicide.

That outbreak of violence contributed to the total number of gun-related homicides in Washington reaching 18 in the first month of the year – much higher than the same month last year.

Washington is struggling with a spike in gun violence. Homicides increased by 40 per cent last year, though the capital’s level of gun crime is still lower than in cities including Baltimore, St Louis and New Orleans.

While some of the deaths in the capital are related to gang violence and criminal activity, innocent bystanders have been killed. Last year, a 10 year old on her way to buy ice-cream was shot dead. A few months earlier, a 14-year-old boy was shot dead on the street near his home.

Across the country it’s a similar story.

On January 23rd, a 21-year-old man walked into a bank in Sebring, Florida, at lunchtime and began shooting.

Five women – four customers and one bank employee – were found lying face down in the lobby, fatally injured by bullet wounds to their heads and torsos.

In November, a gunman walked into a yoga studio during a Friday evening class in Tallahassee, Florida’s capital city, and shot six people before killing himself. Two of his victims died.

As the memory of another mass shooting begins to inevitably fade, the opportunity to truly reform US gun laws will fade too

Florida has been taking the lead in trying to change gun laws at state level.

Though the state has traditionally had very loose laws around gun ownership, in the wake of Parkland it signed several measures into law to restrict gun ownership.

This included raising the minimum purchase age for some weapons to 21.

But, at federal level, there has been little sign of progress to tighten gun ownership laws, despite the outcry over several mass shootings including Parkland and the mass shooting in Las Vegas in 2017, which killed 58.

This week Democrats, who now control the House of Representatives, introduced legislation to ban the kind of high-capacity gun magazines used in many of the most deadly mass shootings in recent years.

The National Rifle Association denounced the proposal to curb high-capacity magazines as “more nonsense from anti-gun zealots who are looking to score political points by proposing legislation that would make criminals out of law-abiding citizens exercising their constitutional right to self-defence”.

The continuing sway of the NRA on political opinion is not the only barrier to a comprehensive change to America’s gun laws. Members of Pittsburgh City Council have been trying to introduce new laws in the wake of last year’s deadly attack at the Tree of Life synagogue in the city.

The mayor, Bill Peduto, is proposing a ban within the city limits on military-style weapons. But some pro-gun-right activists have threatened to sue him, arguing that Pennsylvania state and not municipal authorities can regulate gun ownership.

As the United States reflects on the Parkland shooting, it seems that another year has passed with little to show in terms of gun law reform, despite the valiant efforts of the Parkland school survivors.

As the memory of another mass shooting begins to inevitably fade, the opportunity to truly reform US gun laws will fade too – and America’s relationship with the gun will continue to be a grotesque example of American exceptionalism.