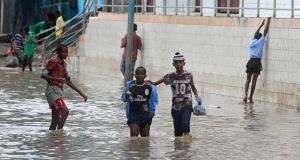 East African countries are calling for help dealing with flooding that has displaced hundreds of thousands of people and caused massive amounts of damage.

At least 250 people have been killed because of the flooding in recent weeks, with about half of those deaths in Kenya, according to the BBC. Flooding has also hit parts of Tanzania, Ethiopia, Sudan, Somalia, South Sudan, Djibouti and Uganda.

“Most vehicles cannot move. They’re just there parked in the water, like big trucks,” said Otim Alpha, a Ugandan musician who travelled to Elegu in Uganda’s north on Tuesday, close to the Sudanese border. “Many people went to [stay in] the lodge because their home was all water.”

Roughly two years of rain fell on Djibouti in one day last week, according to its government and the United Nations. As many as 250,000 people were affected, and houses, infrastructure, schools and community buildings were damaged.

The US government – which has a military base in Djibouti – said it would donate $100,000 (¤90,200) in aid through its Office of Foreign Disaster Assistance, following a request for help from the Horn of Africa country’s government.

In Somalia, more than half a million people have been affected by floods.

“It is part of a pattern of more frequent droughts (rains were very delayed this year [compared to] previous rainy seasons) and more intense rains,” said Alessandro Bini, director of the Somali Cash Consortium, an organisation that distributes aid. “Flooding is receding now, although heavy rain is forecast for next week in different areas of Somalia.”

Four weeks ago, in South Sudan, the government declared a state of emergency across areas affected by flooding. Hundreds of thousands of people have been displaced and rain is expected to continue through December.

Zakaria Mwatia, head of mission for Médecins Sans Frontières in South Sudan, told The Irish Times there were villages that had been completely cut off, which aid organisations can’t reach.

“It’s affected a lot of people with a lot of limited resources, and the challenges of reaching the affected people is big, ” he said. “Usually rain starts reducing in early October in terms of frequency and density but in October it really increased.”

On Monday, near Thika town in central Kenya, crowds watched and cheered as fisherman Vincent Musila was airlifted by police helicopter from a tiny island he had been on for three days. Mr Musila had been trapped there after a river burst its banks.

“There were so many mosquitos,” he told journalists afterwards. “There were crocodiles and other dangerous animals, but I am so happy and I feel well. I feel like I am reborn again.”

The Indian Ocean Dipole, or “Indian El Niño”, has been blamed for exacerbating east Africa’s rains. It means the sea’s surface temperature oscillates between being greater in the west or east. When it is warmer in the west, there is also more rain, while drought becomes more likely in the east.