Giuliani in Ukraine on mission to torpedo Trump impeachment inquiry 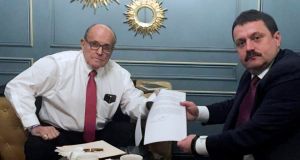 US president Donald Trump’s personal lawyer, Rudy Giuliani, was in Kiev on Thursday to pursue what he called efforts to protect his client from impeachment over alleged improper dealings with Ukraine.

Mr Giuliani is travelling with a film crew from a right-wing US television station that is trying to debunk Democratic Party claims that Mr Trump withheld military aid from Ukraine to pressure it to investigate his political rival Joe Biden.

While in Kiev, the former New York mayor reportedly plans to meet two former Ukrainian prosecutors, Viktor Shokin and Kostyantin Kulyk, who have made corruption allegations against Mr Biden and his son and suggested that Ukraine meddled in the 2016 US election.

Mr Giuliani has pushed both those unsubstantiated claims during concerted efforts to dig up incriminating evidence against the Bidens that current and former US officials say amounted to a shadow foreign policy track in Ukraine.

Before arriving in Kiev, Mr Giuliani travelled to Budapest to meet Ukrainian ex-prosecutor general Yuriy Lutsenko, who accused US diplomat Marie Yovanovitch of trying to obstruct investigations when she was ambassador to Ukraine; despite there being no evidence of wrongdoing, Mr Trump recalled her from the post in May.

Mr Lutsenko and Mr Shokin were lambasted by reform campaigners and ultimately sacked for failing to make headway in Ukraine’s fight against graft, while Mr Kulyk was dismissed last month for dropping out of a mandatory anti-corruption vetting procedure.

During impeachment hearings into Mr Trump’s actions, senior US diplomats and national security officials have expressed deep concern over Mr Giuliani’s bid to create a back channel to Ukraine, but he has dismissed the proceedings as a partisan witch hunt.

“I’m just a country lawyer trying to show his client is being framed. I will do it,” Mr Giuliani told Fox News on Wednesday of his latest visit to Europe.

On Thursday he met Ukrainian deputy Andriy Derkach, a former member of the pro-Russian Party of Regions that for several years was advised by Paul Manafort, who was Mr Trump’s 2016 campaign chief and is now serving jail time for fraud.

Mr Derkach posted photos of their meeting on Facebook and said they discussed joint efforts to stop corruption, including “the ineffective use of American taxpayers’ money by representatives of Ukrainian state agencies”.

In recent months, Mr Derkach and fellow deputy Alexander Dubinsky have called for an investigation into financial crimes allegedly linked to the US Democrats and Joe Biden’s son Hunter, who was the director of a gas firm in Ukraine.

Mr Dubinsky is closely associated with billionaire oligarch Ihor Kolomoisky, who is at odds with Ukraine’s government over the nationalisation of a major bank that he owned and is reportedly under FBI investigation for money laundering. He denies any wrongdoing.