Donald Trump says he will not attend Joe Biden’s inauguration

US president elect Joe Biden has described Donald Trump's decision not to attend the inauguration ceremony on January 20th "one of the few things he and I have ever agreed on." Video: C-Span 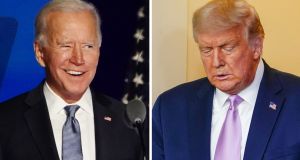 US president-elect Joe Biden, and incumbent Donald Trump who says he will not attend his successor’s inauguration. Photograph: Jim Lo Scalzo/EPA

US president Donald Trump has said he will not attend his successor Joe Biden’s inauguration on January 20th, as political rivals sought to oust the incumbent president before the scheduled transition.

In a separate develoment, House of Representatives speaker Nancy Pelosi has asked the US military to ensure an “unhinged” Mr Trump doesn’t launch a nuclear strike in his last days in office.

Mr Trump tweeted to confirm he would not be present at the Capitol when Mr Biden takes the oath of office, just hours after he made a video statement finally acknowledging that Mr Biden had won the race to the White House.

Traditionally the outgoing president and president-elect travel together to the ceremony at the Capitol from the White House.

There have been discussions at the White House about Mr Trump leaving Washington on January 19th, a source familiar with the matter said. He is expected to travel to his Florida resort, the source said.

In the earlier video statement, Mr Trump committed to a “seamless transition of power” as he conceded the race and condemned supporters who rioted at the US Capitol on Wednesday.

Mr Trump spoke out against the violence seen in Washington DC on Wednesday, calling it a “heinous attack” that left him “outraged by the violence, lawlessness and mayhem”.

He also said now that Congress has certified the results, the “new administration will be inaugurated on January 20th” and his “focus now turns to ensuring a smooth, orderly and seamless transition of power”.

Mr Trump did not address his role in inciting the violence in his video.

To all of those who have asked, I will not be going to the Inauguration on January 20th.

Ms Pelosi, the top Democrat in Congress, spoke to the top US military commander on Friday about taking precautions to ensure the outgoing Republican president cannot initiate hostilities or order a nuclear strike in his remaining 12 days in office.

Ms Pelosi said in a letter to Democratic lawmakers that she spoke to army general Mark Milley, chairman of the Joint Chiefs of Staff, about what measures are available to rein in the president. Mr Trump, angry about his election loss, incited supporters in the days before the invasion of the US Capitol.

“The situation of this unhinged president could not be more dangerous, and we must do everything that we can to protect the American people from his unbalanced assault on our country and our democracy,” Ms Pelosi said in a letter to colleagues.

The Joint Staff did not immediately respond to a request for comment.

Ms Pelosi also said she had not heard back from vice-president Mike Pence about whether he would agree to invoke the 25th Amendment to remove Mr Trump from office “for his incitement of insurrection and the danger he still poses”.

She said “we still hope to hear from him as soon as possible with a positive answer”.

Five people died as a result of the disorder at the Capitol, including a police officer who had been struck by a fire extinguisher.

Mr Trump told his supporters in his video message on Friday that he knew they were “disappointed”, and wanted them to know “our incredible journey is only just beginning”.

House Democrats announced they would impeach the president if Mr Pence failed to work with the cabinet to invoke the 25th Amendment.

Mr Trump offered no clues for how he would spend his final hours in office.

Mr Pence is still expected to attend the inauguration, which will see Kamala Harris will take over the reins of the vice-presidency.

Meanwhile, a laptop was stolen from the office of US House of Representatives Speaker Nancy Pelosi during the storming of the U.S. Capitol on Wednesday, one of her aides said on Friday.

Drew Hammill, an aide to Democrat Pelosi, said on Twitter that the laptop belonged to a conference room and was used for presentations. He declined to offer further details.

The theft of electronic devices from congressional offices has been a persistent worry following the invasion by pro-Trump followers. Senator Jeff Merkley, a Democrat, said on Twitter on Thursday that a laptop was taken from his office.

The demonstrators who broke into the Capitol posted several photographs of themselves using congressional phones and various other devices. One reporter with the right-wing outlet Blaze posted a photograph of what purported to be a computer from Pelosi’s office with emails “still on the screen.” – AP/Reuters