Netanyahu says all Israeli adults will be vaccinated before April 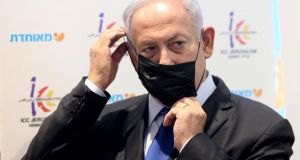 After reaching agreement with Pfizer-BioNTech to expedite delivery of Covid-19 vaccines to Israel, prime minister Binyamin Netanyahu has declared that every Israeli adult will be vaccinated by the end of March, enabling Israel to become the first country to defeat coronavirus.

He said that after talking with Pfizer chief executive Albert Bourla 17 times, including in the last day, it was agreed that another shipment of vaccines will land on Sunday, with “many more” soon after.

“We decided that Israel will be a global model state for the rapid vaccination of an entire country. We truly are a light onto the nations,” he said. “This is a breakthrough that will take us out of the coronavirus crisis, open the economy and get us back to the lives that we love and miss,” he added.

Israel committed to sharing statistical data about the vaccine with the pharmaceutical giant to assist with developing strategies to defeat the virus worldwide.

More than 1.7 million Israelis have already received the first dose of the Covid-19 vaccine – about 18 per cent of the 9.3 million population. The country leads the world in the pace of the vaccine rollout and can now boast effective initial protection for about 70 per cent of the over-60s and those classified as high risk.

Teachers will be the next group to be prioritised.

Due to the imminent arrival of additional vaccines, plans to slow down the immunisation drive have been cancelled.

Mr Netanyahu, who together with health minister Yuli Edelstein was the first to receive the first dose of the Covid jab on December 19th, will receive the second jab over the weekend.

The announcement of the breakthrough came a few hours before Israel introduced a fuller, tighter lockdown that will last for at least two weeks and includes the entire education system. The country has already been in its third lockdown since December 27th, but many of the restrictions were ignored by the public and there was minimum police enforcement.

On Friday, thousands of police officers deployed across the country and roadblocks were set up on major highways to prevent unnecessary travel.

Mr Netanyahu said he hopes Israel will be over the pandemic by the start of the Jewish festival of Passover on March 28th. However, a more important date for him is undoubtedly March 23rd, when Israelis go to the polls in their fourth election in two years.

Israeli officials have refused to reveal how much Israel is paying for the vaccines but according to unconfirmed media reports Mr Netanyahu agreed to pay 40 per cent over the going rate to ensure speedy delivery. He will nonetheless consider this a worthwhile investment if it can help him win the election.