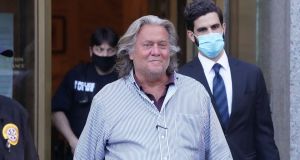 Mr Trump is also set to grant clemency to Elliott Broidy, a fundraiser for the president who pleaded guilty last year to conspiring to violate foreign lobbying laws as part of a covert campaign to influence the administration on behalf of Chinese and Malaysian interests, according to a senior administration official. Other people the president was expected to grant clemency to included rappers Lil Wayne and Kodak Black, both of whom have convictions on gun-related charges.

Mr Trump is also set to grant clemency to Kwame Kilpatrick, the former mayor of Detroit, who left office in 2008 after he was convicted of obstruction of justice and perjury.

The president made the decision on Mr Bannon after a day of frantic efforts to sway his thinking, including from Mr Bannon, who spoke to him by phone Tuesday.

The pardon was described as a preemptive move that would effectively wipe away the charges against Mr Bannon, should he be convicted.

Mr Bannon was indicted and arrested in August by federal prosecutors in Manhattan on charges related to the money raised to promote the construction of the wall long sought by Mr Trump.

The White House had planned to release the list of those granted clemency earlier Tuesday, but the debate over Mr Bannon, who publicly encouraged Trump to fight the certification of the 2020 election results, was part of the delay, officials said.

Mr Bannon helped guide the president’s campaign to victory in 2016. He then had an extraordinarily messy split with Mr Trump in August 2017, prompting him to leave the White House. – New York Times