Joe Biden to be inaugurated as 46th US president

US president-elect Joe Biden has quoted Irish novelist James Joyce as he bid an emotional farewell to his home state of Delaware ahead of travelling to Washington to be sworn-in as US president. Video: Reuters 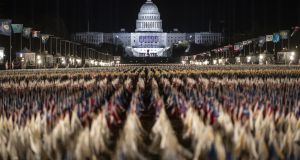 US state flags decorate the ‘Field of Flags’ on the grounds of the National Mall near the US Capitol in Washington D.C. on Tuesday. President-elect Joe Biden arrived in Washington last night with the usual backdrop of celebrations and political comity replaced by a military lockdown. Photograph: Victor Blue/Bloomberg. 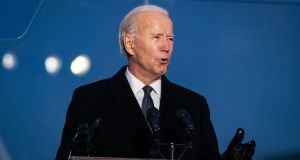 US president-elect Joe Biden speaks at the Lincoln Memorial Reflecting Pool during a Covid-19 memorial to lives lost during the pandemic. Photograph: Al Drago/Bloomberg.

Joe Biden will be inaugurated as the 46th president of the United States later today, bringing a close to four tumultuous years of Donald Trump’s presidency.

Mr Biden is due to be sworn-in at a ceremony at the US Capitol shortly after noon (5pm Irish time).

Mr Trump departed the White House for the final time as US president on Wednesday morning (afternoon in Ireland) and will travel to Florida instead of Mr Biden’s inauguration.

The president-elect and his wife Jill last night attended a ceremony of lights at the Lincoln Memorial to honour the thousands of Americans who have died from Covid-19. They then spent the night at Blair House, across from the White House.

The moving ceremony took place at sunset as America’s death toll from coronavirus passed 400,000. It saw 56 pillars of light representing America’s states and territories illuminate the “field of flags”, which has been assembled on the National Mall ahead of the inauguration, representing the people who cannot attend the ceremony due to pandemic restrictions.

Washington remains under heavy security ahead of the inauguration. The Pentagon confirmed that it had removed a dozen National Guard troops from duty after vetting by the FBI.

In contrast to the crowds that usually flock to Washington to witness a presidential inauguration, the downtown area is off limits to the public due to this month’s attacks and concerns about Covid-19.

Following the inauguration ceremony itself, he will visit Arlington Ceremony along with former presidents Barack Obama, Bill Clinton and George W. Bush.

The day’s events will include performances by Lady Ga Ga, Garth Brooks and Jennifer Lopez and Irish violinist Patricia Treacy.

Mr Biden has promised to unify a country that remains shaken after the attack on the US Capitol. Mr Biden will be sworn-in at the same building that was stormed by a mob of Mr Trump’s supporters on January 6th.

In remarks before he left Delaware yesterday, Mr Biden reflected on his “improbable story” that brought him to the White House.

Growing emotional, he referenced James Joyce’s quote that Dublin would be written on his heart when he died.

“Well, excuse the emotion, but when I die, Delaware will be written on my heart,” he said.

Mr Trump will become the first president in modern times not to attend his successor’s inauguration. Instead, he will hold an early-morning reception at Joint Base Andrews where Air Force One is based, before flying to Florida.

In a “farewell address”, he said that the “movement we started is only just beginning”.

He was also expected to issue a flurry of pardons in the final hours of his presidency.

In one of his final acts as president last night, he declassified documents relating to the Russia investigation, a probe that he has dismissed as a “hoax” throughout his presidency.

But even as he departs Washington, Mr Trump will continue to overshadow the first weeks of Mr Biden’s presidency, as the Senate prepares to hold an impeachment trial.

Mr Trump became the first US president in history to be impeached twice, when the House of Representatives voted to impeach him last week over his role in inciting the Capitol Hill riot. It is now expected that House Speaker Nancy Pelosi may send the article of impeachment against Mr Trump to the Senate next week, paving the way for a trial.

In his strongest comments yet on the events, outgoing senate majority leader Mitch McConnell explicitly accused Mr Trump of provoking the mob that descended on the Capitol.

“The mob was fed lies,” he said, referring to Mr Trump’s erroneous claims that he had won the election.

“They were provoked by the president and other powerful people. And they tried to use fear and violence to stop a specific proceeding of the first branch of the federal government which they did not like.”

Mr McConnell has not yet indicated how he will vote in the forthcoming impeachment trial. Seventeen Republicans will need to join the chamber’s 50 Democrats to convict Mr Trump. They can then vote to bar him from ever holding office again.

As the Senate negotiates behind the scenes about how the impeachment trial will proceed, Mr Biden is expected to sign several executive orders on his very first day in office, while incoming press secretary Jen Psaki is due to hold the first White House press briefing of his presidency just hours after the inauguration.