Donald Trump: ‘Boris would do a very good job’ as leader 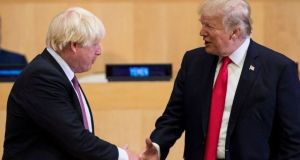 Donald Trump on Boris Johnson: ‘I like him. I have always liked him. I don’t know that he is going to be chosen, but I think he is a very good guy, a very talented person.’ Photograph: PA

US president Donald Trump has defied international diplomatic norms by backing Boris Johnson to become the next Conservative Party leader.

Mr Trump said the former British foreign secretary would be “excellent” in the role, just days before MPs start voting to replace outgoing prime minister Theresa May as Tory leader.

In an unprecedented intervention, Mr Trump said he also liked Jeremy Hunt, who is among those vying for the top job, but appeared to criticise Britain’s environment secretary Michael Gove.

Mr Trump told The Sun newspaper: “I think Boris would do a very good job. I think he would be excellent...

“I like him. I have always liked him. I don’t know that he is going to be chosen, but I think he is a very good guy, a very talented person.

“He has been very positive about me and our country.”

The US president claimed other candidates had approached him in a bid to secure his endorsement.

“I could help anybody if I endorse them. I mean, we’ve had endorsement where they have gone up for 40, 50 points at a shot,” he added.

“Now that is here, but I understand over there would be a great endorsement.”

Mr Gove last week accused the 72-year-old president of “sabre rattling” over his policy towards Iran, but Mr Trump suggested he was wrong criticise him over the issue.

He said: “I’m trying to make it so that Iran does not have nuclear weapons. Very simple. And I can’t think of anybody other than us that would benefit more than the UK, so he should be all for that.

“Nuclear weapons is the single biggest problem that the world has and we can’t allow them to proliferate. We just can’t allow it.”

Commons leader Mel Stride, who is supporting Mr Gove, said it was not up to Mr Trump to select the next Tory leader.

“The president of the United States of course is entitled to his opinion, but it’s not the case of him picking the next prime minister of our country,” he told BBC Radio 4’s Today programme.

“That process as you know will be one involving the parliamentary party and then the membership itself.” - PA