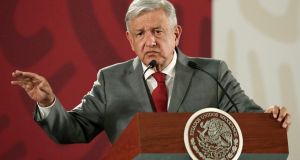 Mexico’s president Andres Manuel Lopez Obrador: calling for US “prudence and responsibility”, saying “The Statue of Liberty is not an empty symbol.” Photograph: Henry Romero/Reuters

The Trump administration opened up a new front in the global trade war, threatening to impose tariffs on all Mexican imports if the country does not stop illegal migration to the United States.

US president Donald Trump announced the sweeping new measures on one of America’s largest trading partner, claiming that “Mexico has taken advantage of the US for decades”.

“Mexico makes a FORTUNE from the US, have for decades, they can easily fix this problem,” he tweeted. “Time for them to finally do what must be done!”

A statement from the president issued by the White House said that “Mexico’s passive co-operation in allowing this mass incursion constitutes an emergency and extraordinary threat to the national security and economy of the United States.”

Under the proposal, a levy of 5 per cent will be introduced on June 10th, with tariffs rising by another 5 per cent on the first day of each month to a maximum of 25 per cent.

Global stock markets fell on the news, the latest move by the Trump administration to impose tariffs on trading partners. Washington and Beijing are still locked in a stalemate over tariffs, with China threatening to retaliate further later in June if a deal is not reached.

Mexico’s president, Andrés Manuel López Obrador, responded to the administration’s surprise announcement in a two-page letter to the president, calling for “prudence and responsibility”. “The Statue of Liberty is not an empty symbol . . . With all due respect, even though you have the right to say it, ‘make America great again’ is a fallacy.”

Later on Friday, the country’s deputy economy minister, Luz Maria de la Mora, warned that Mexico would retaliate though he stressed that it was not something the government wanted to do.

The threat of unilateral tariffs also threatened to derail the USMCA – the trade agreement between the US, Mexico and Canada which was negotiated last year as a replacement for Nafta, but still has to be passed by Congress and the Canadian and Mexican parliaments to take effect.

Business groups were among those who greeted the news with dismay. Business Roundtable, a prominent industry representative body in Washington, urged the administration not to move ahead with the tariffs, warning they would “create significant economic disruption and tax US workers, farmers, consumers and businesses”.

Senior Republicans – particularly those from rural states – also voiced their opposition to the move.

“Trade policy and border security are separate issues,” said Iowa Republican Chuck Grassley, the chair of the Senate finance committee. “This is a misuse of presidential tariff authority and counter to congressional intent. Following through on this threat would seriously jeopardise passage of USMCA, a central campaign pledge of President Trump’s and what could be a big victory for the country.”

Farmers across the United States are already suffering due to the ongoing trade tensions, with exports of products to markets like China falling dramatically.

Last week the Trump administration was forced to announce a $16 billion rescue package for farmers – its second multimillion-dollar bailout for the industry.