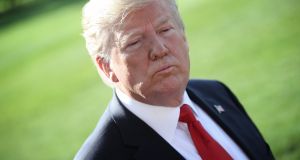 US president Donald Trump renewed his attacks on Special Counsel Robert Mueller on Thursday, a day after the former FBI director broke his silence about his report into Russian electoral interference.

Speaking as he left Washington for an event in Colorado, Mr Trump denounced Mr Mueller as a “never-Trumper” who was annoyed that he had not been appointed FBI director by him.

“Look, Robert Mueller should’ve never been chosen because he wanted the FBI job and he didn’t get it, and the next day, he was picked as Special Counsel,” Mr Trump said. “So you tell somebody, ‘I’m sorry, you can’t have the job’. And then, after you say that, he’s going to make a ruling on you? It doesn’t work that way.”

Mr Trump also claimed that Mr Mueller “loves Comey”, a reference to the FBI director James Comey whose firing by Mr Trump led to the establishment of the Special Counsel investigation.

The president also said that he did not believe that Russian interference helped him get elected. “You know who got me elected?  I got me elected,” he said. “Russia didn’t help me at all. Russia, if anything, I think, helped the other side.”

Mr Mueller said on Wednesday that there was a sustained effort by Russia to interfere in the United States 2016 election, though Mr Trump has repeatedly expressed scepticism about the findings of the US intelligence services.

Mr Mueller defended his decision not to make a judgment on whether Mr Trump committed a crime when he completed his 22-month investigation in March. His intervention has largely thrown the matter into the hands of Congress, which has the power to begin impeachment proceedings against the president.

On Thursday, House Speaker Nancy Pelosi came under renewed pressure to consider impeachment proceedings after two presidential candidates suggested that impeachment should be on the table.

Senator Kamala Harris said: “What Robert Mueller basically did was return an impeachment referral. Now it is up to Congress to hold this president accountable.”

A statement issued by former vice-president Joe Biden’s campaign team said that impeachment may now be unavoidable, though it struck a more cautious tone.

“Vice-president Biden agrees with speaker Pelosi that no one would relish what would certainly be a divisive impeachment process, but that it may be unavoidable if this administration continues on its path,” the statement said.

Mr Trump also responded to reports that the White House instructed that a ship named after the late senator John McCain be hidden from view during the president’s visit to Japan last week.

Mr Trump said he had no knowledge of the action, adding that the official responsible had been “well-meaning”.

“I was not a big fan of John McCain in any shape or form,” Mr Trump said. “Somebody did it because they thought I didn’t like him, okay? And they were well-meaning.”